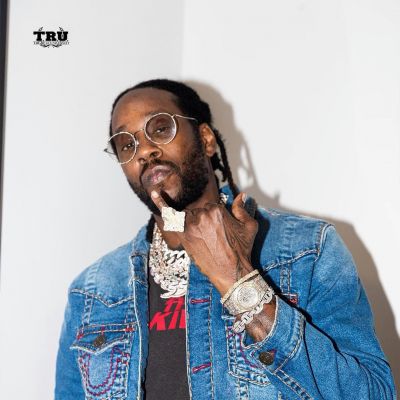 I wake up each and every day with a smile on my face knowing I get to do something musically.

My whole story is just about me having a second chance.

I just be comfortable in my own skin

You rarely get money out of labels, except for when they open up a budget for a project. Other than that, it's a do-or-die type thing.

2 Chainz living a blissful conjugal life with Kesha Ward. In 2006, the couple started dating each other. After two years of dating, the duo welcomed their first baby named Heaven on July 26, 2008.

On October 20, 2012, they were blessed with their second child or second daughter named Harmony. Similarly, their third child a son named Halo was born on October 14, 2015. The duo was in a committed relationship until then and wasn’t married.

2 Chainz has also proposed Ward publicly at the BET HIP HOP awards gala and at the Met Gala red carpet. Finally, the duo tied the wedding knot on the 18th of August 2018.

Tauheed K. Epps who is professionally known as 2 Chainz is an American rapper, composer, singer-songwriter, director, actor, and record producer. Epps previously pursue his career as a basketball player.

Further, he is best known for his single debut Duffle Bag Boy alongside Ludacris under the Disturbing tha Peace label.

The rapper was raised by his mother after his father had trouble with the law. He hasn’t yet disclosed the identity of his parents in the media however, he is the only child of his parents.

Talking about his academic background, he attended the North Clayton High School. He then went to Alabama State University on a scholarship. From 1995 to 1997, he played in the college basketball team.

However, he later transferred to Virginia State University. He holds an American nationality whereas he belongs to African-American descent.

The song features Lil Wayne and they also performed at the BET Hip Hop Awards. Afterward, they released their second studio album Flight 360: The Takeoff on the 29th of September 2009. In early 2011, Epps released a mixtape titled T.R.U. REALigion, the mixtape peaked at number 58 on the Billboard Top R&B/Hio-Hop Albums chart. In September 2013, he released his second studio album ‘B.O.A.T.A. II and third studio album, ColleGrove in March 2016.

Aside from this, he acted in a short drama film Take Over Your Trap as himself. Similarly, he appeared as a musical guest on the talk show, The Wendy Williams show. Chainz announced that his next album would be called Dope Don’t Sell Itself during his set at San Bernardino’s HARD Summer Music Festival.

2 Chainz has accumulated a decent amount of fortune throughout his successful music career. As of 2021, he has an estimated net worth of almost $9 million.

In 2016, he has bought the former Hollywood Hills home and recording studio of Grammy-winning guitarist Steve Vai for $2.45 million.

The rapper has an impressive height with an athletic body physique. He stands at the height of 6 feet 4 inches tall. Likewise, his weight is about 88 kg. He has a dark brown pair of eyes and black hair color.

Similarly, he has a verified Tiktok account with over 626.6k followers. Moreover, he has a self-titled YouTube channel with nearly 3.76m subscribers.