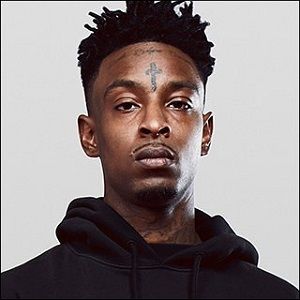 My music is my music, that's what people want to hear, so I'm going to give 'em what they want to hear

All I watch is war movies. The stories be touching... just to see what they go through on both sides of the fence

I might rap about a lot of stuff, but that's just a reflection about what I've been through. But in real life, everything I do is positive.

21 Savage is an American rapper. While he also became locally notable in the Atlanta underground for the 2015 mixtape, The Slaughter Tape before attaining nationwide attention following an extended play collaboration Savage Mode (2016) and its lead singles “X” and “No Heart”, as well as his guest feature on the 2016 in Drake’s single “Sneakin'”.

21 Savage was born in Plaistow, London, England on October 22, 1992 age (26). His birth name is Shayaa Bin Abraham-Joseph. He is the son of Kevin Cornelius Emmons( father) and Heather Carmillia Joseph (mother). He never talks about his father because he wasn’t a part of his life and he claims that his mother is the only one that ever had faith in him.

He spent a rough childhood witnessing and involving in robberies, drug dealing, violence, and crime. His gang’s name was 21, from which he adapted his name. He has also been arrested for several infamous reasons. Once when he was driving, he was caught with 22 grams of marijuana, 89 hydrocodone pills, a Glock .40 and a .9mm Ruger.

Also, he was bullied when he was a kid, hence to protect himself from them, he would carry a pistol. He was just in seventh grade when one of his teachers’ from the school found out about it and expelled him from the school.

He has six sisters and four brothers but the names are unknown. He belongs to British nationality and Black British ethnicity. His birth sign is Libra.

On talking about his education, while he was in seventh grade, he was expelled from Stone Mountain Middle School when he brought a pistol to protect himself from bullies. After he was also kicked out of every school in Dekalb County, his mother put him into a school in Gwinnett County. Eventually, he is dropped out.

On talking about his profession, he would later fall back to it as a career, steering himself further away from the violent life he has known growing up, a decision that is playing him well. During and after drug deal shoot-out wasn’t enough for him to make a turnaround. During 2013, he finally made the decision to change.

Whereas, he turned to music as his therapy and his way out of his doomed life.  The first was a joint effort with Sonny Digital, titled Free Guwop, in honor of his rap icon and influence, Gucci Mane. The second was the follow-up mixtape, Slaughter King.

Additionally, XXL magazine named him as one of the members of the “Freshmen Class” of 2016. This was a big boost to his career.  Whereas, the album also produced his first platinum record, a track titled X which he did with the rapper Future.

In addition, all this success brought Epic records to his doorsteps. During 2017, he announced that he had signed with them. Likewise, he also followed this up with the release of his debut studio album titled Issa Album. The lead single from the album, Bank Account also made it to No.20 on the Billboard Hot 100.

There is no information regarding his income, salary. Whereas, his net worth is around $ 8 million.

There was a rumor that Amber Rose cheated on him with one of his friends. Currently, he is being accused of $1 million by the promoter in a civil case. He had charged for the show but didn’t turn up at the time of performance on Sept. 4, 2016, concert at Club Bo’Maz in Hinesville.

On talking about his body measurements, 21 Savage has a height of 5 feet 10 inches. Additionally, he weighs is 72Kg. 21 Savage’s hair color is black and his eye color is dark brown. The case is regarding 2016’s performance due to the breach of contract.

Also, read the affair, salary, the net worth, controversy, and the bio of Kiari Cephus, Baby Bash, Talia Sagginario

Atlanta rapper 21 Savage arrested by the Immigration and Customs Enforcement for illegal stay in the USA!

Dating since 2011 and are still together, Gillian Amalia Zinser an American actress known for her appearances as Ivy Sullivan in 90210 is happily living with Luke Grimes!