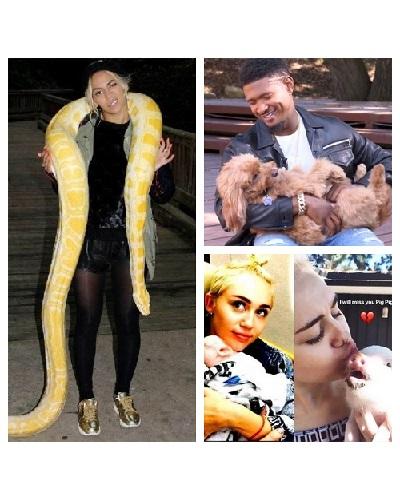 People love to have a pet in their homes. They are comforting partners, cute, and adorable. They play with us and we forget all our stress. They stay with us all the time and entertain us. Mostly, people like to have cats or dogs. But, people also like to have other as pets such as fish, tiger, hamsters, birds, monkey, duck, etc.

Just like normal people Celebrities also keep pets in their homes. Sometimes they are expensive as well as different too. If you are interested then scroll down more to know 7 celebrities’ pets and their worth.

1. Miley Cyrus and her Peppa

American Miley Cyrus is a singer-songwriter and actress. She really loves the animals and always helps and loves them. She has pets including dogs, cats, pigs, houses, etc. Pigs are the favorite on her list. She really loved her previous pig pet named, Pig Pig. Her Pig Pig is worth around $700-$1,500.

Greatest heavyweight boxer Mike Tyson is an American former boxer and actor. He has 3 Bengal tigers in his house. He bought them when they are cubs. He spends around $200k on his tiger pets yearly. One tiger cub is worth around $2,500.

American Kim Kardashian is a model, media personality, and businesswoman. She has pet dogs named Sushi and Sake. They are very cute and adorable. Her children also like to play with them. Her dog is cost around $1,300.

American Beyonce is a famous singer-songwriter, businesswoman, and actress. She has a pet Gigantic BOA python snake called snake Beyonce AKA Fendi. The snake has a beautiful yellow-white stripe. BOA Python costs around $1,500+.

5. Tippi Hedren and the Lions

American Tippi Hedren is an actress, former fashion model, and animal rights, activist. She loves to have a lion and tiger as a pet. She likes to spend her time with these huge 400-pounds big cats. A lion cub is cost around $350k.

Also read: 11 celebrities’ homes! What is it worth?

American Kirstie Alley is an actress, producer, television personality, and model. She thought that lemurs are great and beautiful creatures. She is also interested in conservation in Madagascar. She has 14 lemurs as a pet in 2016. Lemurs cost around between $2,500 to $10,000.

The Usher is a famous American singer, songwriter, businessman, and dancer. Besides, his music he likes to play with his cute, soft, cuddly dog Goldendoodle. He buys this Goldendoodle auction for $12,000. But, that money is not only for a dog it is also for charity.