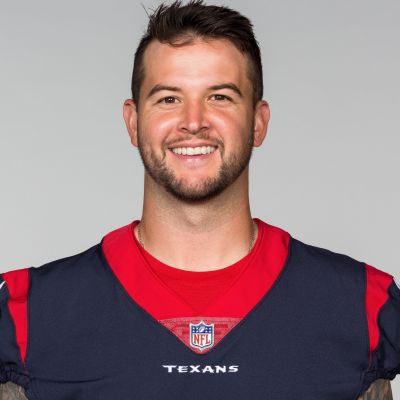 Quick Facts of A. J. McCarron

Relationship Facts of A. J. McCarron

Who Is A. J. McCarron Married To?

A.J. McCarron is a married man. He became engaged to model and longtime girlfriend Katherine Webb in March 2014. The pair later married on July 12, 2014, in Orange Beach, Alabama.

Their marriage is going strong as no news regarding any extramarital affairs is known at present.

A. J. McCarron aka Raymond Anthony is a professional football player, who plays a football quarterback and is also a free agent.

For the 2014 NFL Draft, he was drafted by the Cincinnati Bengals in its fifth round. He has also played for Buffalo Bills, Oakland Raiders, Atlanta Falcons, and Houston Texans.

Similarly, his ethnicity is Caucasian and as per the astrological chart, his birth zodiac sign is Virgo.

Moving on to his parents, he was born to his father, Tony McCarron, and his mother, Dee Dee Bonner. Similarly, he is the elder child of his parents having a younger brother, Corey McCarron. Corey previously played tight end at Alabama and later transferred to play fullback at Middle Tennessee State.

Moving on in his educational life, he studied at Our Lady of Lourdes Catholic School from kindergarten to fourth grade and later shifted to St.Paul’s Episcopal School.

On May 3, 2008, he signed with Alabama. He got a redshirt during his first season at Alabama and was not part of the game during the whole season.

However, during his redshirt freshman year, he appeared in around nine games. He passed 999 yards and 12 touchdowns with zero interceptions in his first five games of the season.

McCarron made his first career game debut by playing over Cleveland Browns with a 31-10 victory in the 9th week. Though he played in one game in 2o16 he could not record any statistics.

Then he was traded to Cleveland in the 2018 NFL Draft on October 21, 2017. However, later he filed a labor grievance against the Bengals with a demand to be an unrestricted free agent. Fortunately, McCarron won the grievance on February 15, 2018, and became a free agent. In general, he was part of three games with 14 passes for 66 yards in the 2017 season.

Following that Buffalo Bills signed him on a two-year deal worth, on March 14, 2018. Unfortunately, he went through a shoulder injury.

After the Raiders, Houston Texans signed him a one-year contract on March 20, 2019. During his whole game, he made 225 yards and interception with a touchdown in the 35-14 loss.

Subsequently, he had a one-year contract with the Atlanta Falcons on April 30, 2021. While playing against the Miami Dolphins, he underwent a torn ACL in the Week 2 preseason.

How Much Is A. J. McCarron’s Net worth And Salary?

The former Oakland Raiders player, McCarron has an estimated net worth that ranges between $1-5 Million. He is making good money as a footballer, as he keeps signing with various clubs.

Is A. J. McCarron Involved In Any Rumors Or Controversies?

To date, A.J. McCarron has not faced any serious rumors or buzzes. He has been able to maintain a clean profile.

The athlete stands at the height of 6 feet 3 inches while he weighs around 100 Kg. In addition, his chest size is 41 inches, waist size is 17 inches and hips size is 31 inches.

Furthermore, he has a pair of dark brown eyes and hair of the same color as well.

A.J. is also very active on social media platforms. The free agent athlete is available on Instagram under the username, @ajmccarron, where he is followed by nearly, 44.3K people.

On the other hand, his Twitter account is enriched with over 449.5K people. There is also an official Facebook page under his name, that has garnered around 241K followers.