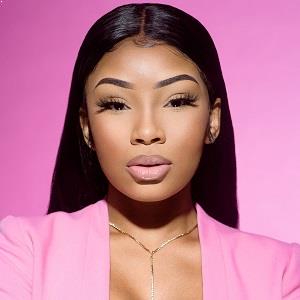 I’ve always been into beauty since I was born. Even as a little girl, I had every color of roll on lipgloss from the beauty supply store. I always had a fresh pair of press on nails every week or two. I learned how to braid and do hair at age 5 and always begged my mom to apply her makeup on me. To really answer the question: I have no clue why I am so in love with beauty! Its a love that I was born with. Anything that has something to do with beauty makes me feel in control and confident.

What is the relationship of Aaliyah Jay?

Aaliyah Jay was in a relationship with NBA player Archie Goodwin in 2016. Additionally, she also dated PNB Rock who is a hip-hop recording artist from Philadelphia. She also had a fling with Rell.

Currently, she is in a relationship with a man whose details are not known. She had an abortion in 2015 and she does not have children from any of her relationships.

Who is Aaliyah Jay?

Aaliyah Jay is an American YouTube personality. She has a self-titled YouTube channel which has over 1.2M subscribers. Additionally, she is also famous on Instagram and has more than 1.6M followers.

Jay was born in Massachusetts on June 23, 1993. Most of the information relating to her early life and childhood is not available at present. She is of American nationality. Furthermore, her ethnic background is African-American.

Talking about her education, there is no detailed information regarding Jay’s educational background.

Jay initially is a popular beauty guru on YouTube. She began her career on the video-sharing platform YouTube in November 2011. However, her first video wasn’t dated until almost a year later. ‘STORY TIME: I met the side-chick!’ is one of her more famous videos which has over 2 million views.

Furthermore, people mostly recognize Jay for her beauty tutorial videos. Due to her huge fan-following, she is one of the most recognized faces in the YouTube community.

Jay has not revealed her current salary. Additionally, she has an estimated net worth of $1 million as of 2022.

Is Aaliyah Jay involved in any rumors and controversies?

There was a rumor that Jay might be dating basketball player Shamorie Ponds. This later turned out to be true. At present, there are no rumors concerning Jay and her career.

Talking about her body measurement, Jay has a height of 4 feet 11 inches. Additionally, the color of her hair is black and her eye color is hazel.