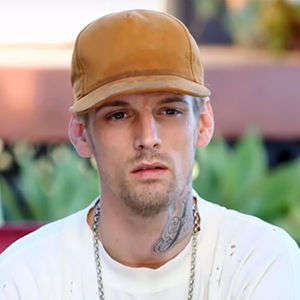 Aaron Carter was in a relationship with Melanie Ann Martin. But in April 2020, she was arrested for domestic violence.

After her arrest, Carter says he is single.

He was also linked with Madison Parker. Right after his break up, he revealed on Twitter that he is attracted to both boys and girls since he was 13.

Also, he thanked his fan for supporting his bisexuality. Prior to this relationship, he was in a brief relationship with beauties like Trisha Paytas in 2016 and Kaci Brown (2006 – 2007).

In his relationships, he was engaged two times. The one with Kari Ann Peniche in 2006 and another with Maile Hochuli in 2010. Unfortunately, both of the engagement was called off.

Who is Aaron Carter?

Handsome Aaron Carter is an American pop and hip hop singer. He garnered a lot of fame for his studio albums including hit singles such as I Want Candy’ ‘Aaron’s Party (Come Get it)’, and ‘That’s How I Beat Shaq.’

He opened his eyes for the very first time on December 7, 1987. He was born in Tampa, Florida, U.S. and has an ethnicity of English, German, Scottish, Welsh, Irish, Scots-Irish/Northern Irish, possibly remote French-Canadian

He also has a brother, Nick, and three sisters, Angel (a model), B.J. and Leslie.

As per the academics, he went to Frank D. Miles Elementary School and the Ruskin School.

Aaron Carter started his career as the lead singer of a local band ‘Dead End’. However, he left the band after two years. Later in 1997, he released his first single ‘Crush on You’. At the end of that year, he released his debut album which became quite popular in several European countries.

Furthermore, he revealed his next album ‘Aaron’s Party (Come Get it)’ released on September 26, 2000. The album several popular songs like ‘I Want Candy’, and ‘That’s How I Beat Shaq.’ Similarly, in the next year, he released his third album which was not as popular as the second album.

Later, he released his final album under the label of Jive Records ‘Another Earthquake’ was in 2002. It didn’t do well as the previous albums did.

Moreover, he appeared in l television programs such as ‘Lizzie McGuire’ and ’48 Hours Mystery.’ In 2009, he competed in an American dance competition TV series ‘Dancing with the Stars’ partnering alongside Karina Smirnoff. Recently, he released his next album LØVË EP on February 10, 2017.

This singer’s net worth is estimated at around $500 thousand.

Due to poor financial management, he was in a tax debt of $1.3 Million. Surprisingly, the fame and talent he has been able to generate income to pay off the debt in 2014.

As per the records, a musician’s average salary is around $42k per year.

In 2008, Carter was caught for over speeding. In 2017, he was arrested for driving while having drugs.

Aaron Carter has a height of 6 feet and a weight of 72 kg matching his body.

Aaron is active on social media.