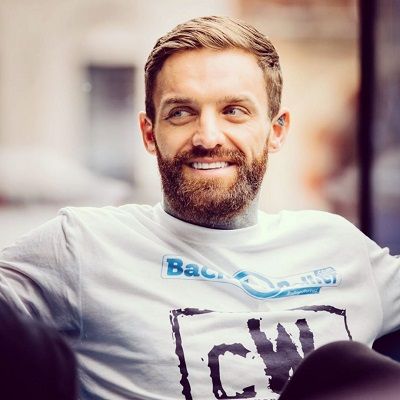 Aaron Chalmers is in a relationship with Talia Oatway. They started to date each other from June 2017. But they broke up in Oct 2019. They even unfollowed each other from social media.

However, as soon as Talia published the news of her pregnancy, Aaron patched things up. At present, this couple is together and are waiting for their son to arrive.

Talia has a daughter Siennah from her past relationship.

Who is Aaron Chalmers?

Aaron Chalmers is an English reality star, actor, and mixed martial artist. He is best known for appearing in the show Geordie Shore and the sixth series of Ex on the Beach.

This reality star was born on 26 May 1987, in Newcastle, England. His ethnicity is English.

His nickname is ‘The Joker’ and ‘Squeaky’. He has a younger brother called Terry.

There is no information bout his father, mother, academics as he likes to keep his personal life far from the public.  He is of Scottish ethnicity.

Aaron Chalmers appeared in the reality show Geordie Shore and the Sixth series of ‘Ex on the Beach‘. It was announced that Chalmers had joined the cast of Geordie Shore for the eighth series. He used to work on an oil rig.

Chalmers had his first MMA fight beating Greg Jenkins in May 2017. The actor had also practiced Muay Thai. Likely, on Sep 15, 2017, Aaron won his second professional fight at BAMMA on 31 Oct at the SSE Arena. This martial artist won his final fight for BAMMA against Karl Donaldson on December 15.

He won his first fight against Ash Griffiths on 25 May 2018 for the Bellator 200 event. Chalmers suffered his defeat as a professional fighter, defeated by American Lorey Browning in the third round. Afterward, Aaron won Column with a submission victory over Fred Freeman. He won 5 mixed martial arts, 2 by Knockout, and 3 by submission.

Later, he worked in the movie Geordie Shore as a cast member and in the movie ‘Ex On The Beach’ in 2017. Chalmers also faced Austin Clem in a Welterweight bout on February 22, 2020.

The average salary of this actor is $70,000. Meanwhile, according to some sources, his estimated net worth is $1 Million.

He has a detached house in Newcastle which has a huge garden.

This star was in a legal dispute with BAMMA that was set for the courts. Aaron told them he wants to break away from his Geordie Shore label.

It was rumored that Aaron and his girlfriend split. And they even unfollow each other on social media.

He is obsessed with tattoos and is popular for his penis tattoo which was done in 2016.