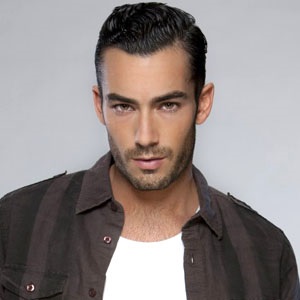 For reasons unexplained, every person in the world is born with a large gaping hole in the center of their chest...while not uncomfortable, it is widely considered unsightly, and pretty much everyone tries to fill it with something...some people fill it with religion, others just buy a bunch of stuff, and some even fill it with other folks...I left mine alone, though, because I found out if you run against the wind at just the right angle, it makes a whistling noise.

In the beginning, Aaron Diaz is found to be dating Mexican actress and singer Sherlyn Montserrat Gonzalez Diaz but somehow their relationship didn’t last long. After breaking up with Sherlyn, Aaron married Mexican actress Kate Del Castillo on 29th August 2009 in Las Vegas. The relationship between Aaron and Kate was always on and off. Time and again they were breaking up and patching up but the couple finally separated in June 2011 and got legally divorced on 2012. And then Aaron met with his present wife Lola Ponce who is an Argentine singer-songwriter, composer, actress, and a model as well as his co-star in television series El Talisman.

The couple got married in a private ceremony held in Morocco in June 2015 and blessed with two daughters Erin Diaz born on February 27, 2013, in Rosaria, Argentina and Regina Diaz born on August 16, 2014, in Miami, USA. The couple is found living happily having no external affairs and there is no sign of their divorce.

Who is Aaron Diaz?

Aaron Diaz is Mexican Actor, Theatre artist, model, and singer best known for his work in the television sitcom Quantico as Leon Velez, in Teresa as Mariano Sanchez Suarez, in Santa Diablo as Santiago Cano, and in the movie Marcelo as a Marcelo.

Aron was born on 7 March 1982, in Puerto Vallarta, Mexico.He is 39 years old. His nationality is Mexican and his ethnicity is mixed(Mexican and Irish-American).

Born as Aaron Diaz Spencer in Puerto Vallarta, Mexico to an Irish-American mother and Mexican father but moved to San Miguel de Allende where he spent much of his childhood. Diaz’s parents own a restaurant.

He moved to California to attend high school and started working as a model for his livelihood. After completing his education he returned back to Mexico to study acting and joined ‘Centro de Education Artistica’ (CEA). He developed his amateur acting skills to a more professional one.

Aaron Diaz got his first break when he was studying acting in CEA. He debuts as the role of Enrique ‘Kike’ Gonzalez on a soap opera ‘Class 406. With his acting skill, he became popular and set a career path. Afterward, he was offered many roles in a television sitcom.

In 2004, he has done another teen drama ‘Corazones al limits’ with his formal girlfriend Sherlyn and Sara Maldonado. To date, Diaz has appeared in many television sitcoms playing different characters earning much more popularity. He was nominated in many categories like the Best male in the lead role, Best couple, and much more. Apart from his acting career, he is also a designer and entrepreneur with the clothing brand ‘Perra’.

He is also a singer and has launched his first album ‘Enamorate de mi’ in June 2009 and his second self-titled album ‘Aaron Diaz’ in 2011. He worked as a model for the calendar as well and with the success of it, he was offered again to be a model for the next year 2012 in December 2011. With his impressive acting, he has been successful in impressing his fans and critics currently working in the ABC thriller series Quantico in the role of photojournalist Leon Velez.

Aron Diaz: Salary and Net Worth

He has a net worth of $6 million but his salary is not revealed yet.

Previously Aaron Diaz was rumored to be gay but the rumor fades away when he became the father and again rumors about him dating Ana Brenda were spread. Although, Brenda clearly denied it saying they are just friends.

Aron has a height of 6 feet. His body weighs 78kg. He has black hair and green eyes.