All-American football player, who is getting spotlighted for playing Super Bowl Champions LVI.

Who is Aaron Donald's fiance? [past relationships, kids]

Donald is engaged to Erica Sherman and they have a son together, namely Aaric Donald.

Erica is a graduate of Louisiana State University and she has been involved with sports.

The Defence tackler, Aaron, and his fiance met at the Rams building, where she worked at Community Affairs.

The pair now together run an organization in Pittsburgh, Ad99 solutions that reaches out to underprivileged youth through sports.

Talking about his previous relationship, Donald has two children with his former girlfriend Jaelynn Blakey, a son, and a daughter. 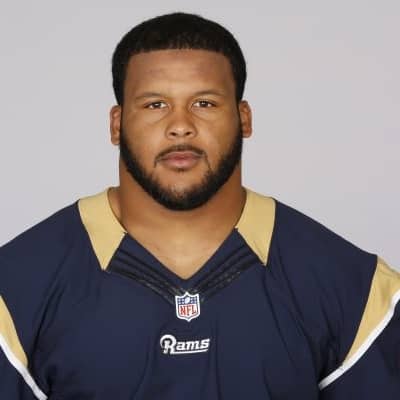 Who is Aaron Donald?

He represents the first match-winning team Los Angeles Rams in the Super Bowl 2022.

He was born on May 23, 1991, in  Pittsburgh to All- American parents. The detailed information regarding his parents, father, mother, and professional background is under review.

Additionally, he has two other siblings who along with his father motivated him in physical training from the young age of 12.

The 30-year footballer is a Gemini zodiac and holds American citizenship.

He resembles the All-American ethnic groups and grew up in Pittsburgh, in a working-class family in the city’s Lincoln–Lemington–Belmar neighborhood.

Talking about his education, he first attended Penn Hills High School, where he played high school football under head coach Ron Graham. He later joined the University of Pittsburgh.

During his college days, he was selected in the first-team All-State Class AAAA for two seasons finale.

He started as an offensive guard and collected 63 tackles, 15 tackles for loss, and 11 sacks as a senior.

To begin his career, he represented his college and played in several championships starting from the year 2010 and has a total of 52 ground plays till 2013.

On June 16, 2014, the Rams signed Donald to a four-year, fully guaranteed $10.13 million rookie contract with Los Angeles Rams with a clause of a $5.69 million signing bonus and a fifth-year option.

Coming on to his record, he set the record for the fastest 40-yard dash time for a defensive tackle with a 4.68 breaking Tank Johnson’s record of 4.69 in 2004.

In the first match of Super Bowl LVI against the Bengals, he had two sacks and nearly got a third on a 4th downplay. He gave the Rams the ball and the victory through his efforts.

The Super bowl LVI commenced on February 13 at 6:30 pm ET at  SoFi Stadium in Inglewood, California, the home venue of the Rams.

Aaron Donald is one of the highest-earning NFL players and the 40th richest athlete in the world, according to the 2021 Forbes list of the world’s highest-paid athletes.

According to Forbes, his annual salary is $ 35 million.

Going deep on his contract deals, he has a record-breaking deal that included $87 million guaranteed, plus a $40 million signing bonus.

He also has million dollars deals with companies like Electronic Arts and Dick’s Sporting Goods.

He does not mix his personal and professional life thus, has a clean profile among footballers.

Aaron Donald stands tall with a height of 6 feet and 1 inch and weighs around 129 kgs.

Further, he has a fit body with a brown complexion. On top of that, he has black eyes and black hair.

Aaron Donald is active on Twitter with 124k followers and is also available on Instagram under the username @aarondonald99 has 978k followers.