Aaron Hernandez was an American Football tight end in NFL for the New England Patriots. He was married to Shyanna Jenkins and the couple is blessed with a daughter, Avielle Janelle Jenkins-Hernandez. 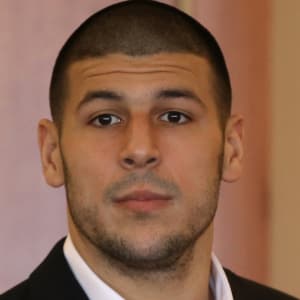 'Either you run the day, or the day runs you.' Hope y'all had a good one

There's 2 things I love in this world: Burritos and Murder

What is the relationship of Aaron Hernandez?

Aaron Hernandez was dating Shyanna Jenkins in 2007. After five years in a relationship, they engaged in November 2012 after the birth of their daughter, Avielle Janelle Jenkins-Hernandez in the same month. They were neighbors and had known other since their elementary school. She supported Hernandez during his charges of a murder case.

Who is Aaron Hernandez?

Aaron Hernandez was an American Football tight end in NFL for the New England Patriots.

His promising life came to an end when he received a life sentence for murdering semi-pro football player Odin Lloyd in 2013. Later, he committed suicide in a jail cell in 2017.

Aaron Hernandez was born on November 6, 1989, in Bristol, Connecticut, US. His father’s name is Dennis Hernandez who is of Puerto Rican descent and his mother’s name is Terri Valentine-Hernandez, of Italian descent.

So, he was of Puerto Rican and Italian ethnicity. He was an American citizen. He had one sibling brother, Dennis Jr known as DJ. Their father died due to a hernia complication when Aaron was 16.

Aaron was educated through Bristol High School and graduated from the University of Florida. From his early school life, he started his sporting career and went on established as a good player.

Firstly, Aaron was a Basketball player for Bristol Central High School coached by University of Connecticut’s women’s coach  Geno Auriemma. He was a star player after winning the 2006 Central Connecticut Conference Southern Division Championship where he received first-team All-State honors. After that his senior year was marred by the untimely death of his father due to a hernia complication.

By then from 2007, he established himself as a sturdy blocker and star tight end at the University of Florida. Tight end record of  111 catches across three collegiate seasons mentioned him at All-American for the 2008 team that won the National Championship He also was named as a Consensus All-American the following year.

With 111 receptions for 1,382 yards and 12 touchdowns, he finished his college career and drafted himself to senior level and enter the 2010 NFL Draft. He was drafted by New England Patriots in the fourth round (113th overall). Then after he never looked back and went to combine with fellow tight end Rob Gronkowski and broke numerous records before a loss in Super Bowl XLVI to the New York Giants.

After his death on April 19, 2017, there were unconfirmed rumors and allegation from a strong source about his sexual orientation. His former girlfriend in Oxygen’s ”Aaron Hernandez Uncover” reveals that he had suggested he was gay.

He was convicted of murdering semipro football player and fiancee’s sister’s boyfriend O.J. Lloyd on June 7, 2013. He was charged with first-degree murder and five firearms violations and that cause him to face a life sentence without the possibility of parole for the murder of Odin L.

Before that, he found himself of drive-by shooting charges in which two men, Daniel Abreu and Safiro Furtado, were killed. Five days after double homicide Aaron suicide on April 19, 2017.

Aaron Hernandez was 6 ft 2 inches tall. He weighed around 111kg or 225 lbs. His eyes and hair both were blacks in color.

Also, read a biography of an American football player Tyus Bowser who is from Tyler, Texas.