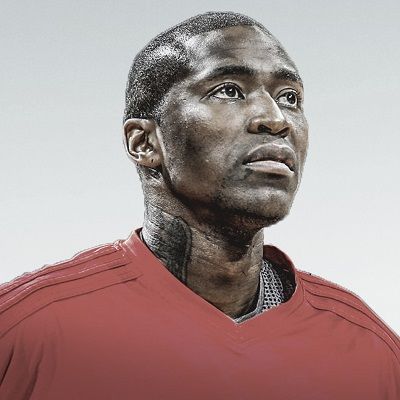 “I’m not retired. I am enjoying this time with my family. … So I’m looking at it like the glass is half full because I’m able to do things that I wouldn’t have been able to do.”

“I’m not bitter. However, I am not in full reflective mode either. Still, at times, I stop and I am like wow. You had a commercial with Jay-Z and Michael Jordan. You had your own shoe. There’s some really cool things that have happened along this journey that I don’t normally get a chance to think about.”

“So, either way, I can’t lose because either I’m going back to play in the NBA or I’m going to be here with my family.”

“That’s the way I was raised. I was always a giver by nature. I wanted to make sure the person next to me or maybe even the person I do not know did not go without if I could help it. That’s always been in me.”

“The NBA makes you become a bigger version of what you already were. If you were somebody who was not so nice and you came into a lot of money and fame, then you are probably going to abuse that in the wrong way. However, if you come into those things and you were doing the right things, then chances are you are going to do more of the right things. And for me that’s what it’s been about.”

“The sky is the limit for that guy and he could do whatever he wants to do.”

“I’ll be around the game, but I think I’ll be more involved with the community because now I’ll have more time to put my energies toward that and go from there. It’s kind of exciting because anything and everything is possible.”

“Eighteen years. Seven teams. Eighteen head coaches. Fit is first and foremost when I am thinking about where I will play next. Last year, I may have made the mistake of not thinking fit all the way through.”“

You look at my career, when the fit was right, I contributed on the court. … I know people that care for me want me to win (an NBA title), but I don’t know if my career will be defined by that.”

Aaron Jamal Crawford and Tori Lucas have been married since 2014. Tori Lucas-Crawford is a homemaker. They were wed by the Seattle waterfront amid their relatives and JC’s league. JC and Tori Lucas’s wedding guests included Chris Paul, Grant Hill almost the whole league of Clippers. Tori set up Sir Mix-a-Lot to mix their favorite 90’s hits along with their favorite brews.

Jamal and Tori have three children, son  JJ  is 10 years and daughter London Crawford is 7 years old. Their 22-year-old son Eric is from JC’s previous relationship. Eric is also the eldest.

Who is Aaron Jamal Crawford?

In the NBA, Jamal is the second player to have scored 10,000+ career points off the bench.  As of the Season 2018 through 2019, he plays the position of GF in his favorite Jersey #11 with the Phoenix Suns.

After Jamal completed high school in 1999, he joined the University of Michigan.

Jamal’s professional career started the day he received a scholarship from the University of Michigan. There he played college basketball for the Michigan Wolverines.

Then on 28th June 2000 and just one season old at the University of Michigan, the NBA declared Jamal as their pick for 2000 NBA draft. In 2018 – 2020, he is playing for Phoenix Suns. Prior to this, he played for Minnesota Timberwolves, Los Angeles Clippers, Jersey, Portland Trail Blazers, Atlanta Hawks, Golden State Warriors, New York Knicks, as well as Chicago Bulls.

JC is a tall Shooting Guard. He is recognized for his distinct crossover move and skillful handling of the ball to score buckets. JC is one of the greatest and the deadliest among the Sixth Men to ever play the NBA.

In 2018 through the 2019 season with Phoenix Suns, JC made NBA history in the season finale. He scored 51 points on 18-of-30 shooting in 38 minutes off the bench. This was during a 120-109 defeat at Dallas on April 9, 2019. JC is the senior-most player to score at least 50 points. JC is also the only player in the NBA’s league history to score at least 50 for four different teams. Additionally, JC is also the only player to score a 50 as a reserve.

2018, JC received the NBA Twyman-Stokes Teammate of the Year Award

In 1999, Jamal was a young amateur basketball player and a student at the Rainier Beach High School in Seattle. There in Seattle, he lived with a businessperson for three years, a naive decision and that led to inevitable consequences in the initial stages of Jamal’s amateur-professional career. The NCAA subsequently ruled it as a breach of convention and suspended him for six games. The National Collegiate Athletic Association ruled that, as an amateur, Jamal is not entitled to a sponsor or guardian, given any unique situation.

Marvin Krislov, who was the university vice president and general counsel at the time, clarified that Jamal’s mother, Verona Skinner-Crawford had full knowledge about this living arrangement. Verona is believed to have permitted Jamal to live with an individual who would also be his guardian. In this arrangement as clarified by Krislov, Verona hoped that it would enable Jamal to continue playing amateur basketball and prepare him for a professional career in basketball in the future.

JC has black hair and black eyes. His height is 6 feet and 5 inches and he weighs 83 kg.