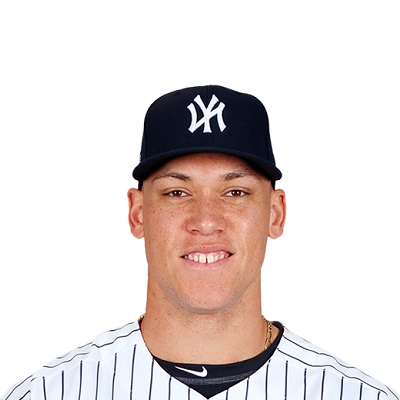 I just take it one day at a time, try to forget about what I did the day before. Go out there like every day is Opening Day.

Aaron Judge is currently in a complicated relationship. He is dating  Samantha Bracksieck and they are in an on/off relationship as of June 2019.

Previously, he had dated Britt Hodges during his high school and then dated Jen Flaum, a model in 2017. But, they could not hold the relationship and separated after a year.

Who is Aaron Judge?

Aaron Judge is an American baseball player who is currently playing as an outfielder for the New York Yankees of Major League Baseball (MLB).

He was born on April 26, 1992, in Linden, California, USA. His birth name is Aaron James Judge. He was raised by his adoptive parents Wayne Judge and Patty Judge.

His adoptive mother and father adopted him after a day he was born. They worked as teachers in Linden, California. He has an older brother named John Judge, who was also adopted.

Aaron holds American citizenship but his ethnicity is African-American-Caucasian.

He joined Linden High School and then attended the  California State University.

He was a three-sport star and played baseball, football, and basketball while he was a student in high school. He was selected by the Oakland Athletics in the 31st round in the 2010 Major League Baseball draft. But he joined the California State University and played for Fresno State Bulldogs baseball team in the Western Athletic Conference.

Later, he was selected by New York Yankees in the 2013 Major League Baseball draft with the 32nd overall selection. Also, he signed a contract with the team and achieved a $1.8 million signing bonus.

Aaron Judge has made his professional debut in the minor league was with Charleston River Dogs of the Class A South Atlantic League in 2014. He debuted MLB on August 13, 2016, against Tampa Bay Rays and has been playing for the Yankees since then.

He has an estimated net worth of around $10 million and he has earned that sum of money from his professional career. Also, he earns around $622,300 per year. Also, he has signed endorsement deals with Adidas, Pepsi, etc.

Aaron has been successful in keeping himself far from rumors and controversies in his personal and professional life.

Aaron Judge has a height of 6 ft. 7 inches and weighs 127 kg. He has dark brown eyes and black hair. His shoe size, dress size, etc. are not available.