Updated On November 4, 2020 | In Career , Dating , Relationship
Share this 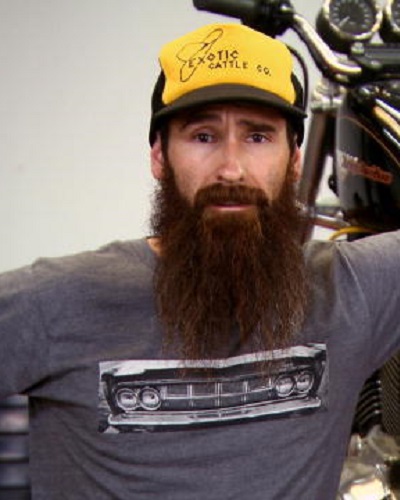 Aaron Kaufman is a better known American actor and a reality show player who also works as a mechanic as well as a fabricator. He is better known for his active participation in Discovery’s TV serial “Fast N’ Loud”.

Aaron Kaufman is busy in his career but what about his personal life? Is he dating someone? Let’s check it out.

Aaron’s Relationship and Dating with his Ex-Girlfriend

Everyone knows that he is a brave man with his own distinct talent. But the people do not seem to be conscious about his dating life. The reality show star Aaron Kaufman is not married yet. He has been in a relationship in his life but he has not thought about his married life yet.

His personal life is not exclusive as people want, but seeking into his personal life, he is dating someone. Aaron once was in a relationship with Lindsay J.

The attractive and positive charm of Aaron must have captured the heart of the lady.  The couple started dating in 2013 and it is said that they lived together. The pair stayed in a relationship but they were not together for a long period of time.

The relationship of the couple was well going to all fans but they broke up for some mysterious reason. Aaron Kaufman and Lindsay J. were in a relationship for about three years but did not get married and parted ways.

After the couple broke up, Lindsay created a blog named “About That Bearded Guy“.  She posted her and Aaron’s photo and answered the questions of the fans of the show Fast N Loud in that blog.

Lately, Aaron was enjoying his single life but it is seen that he is in love once again. Currently, he is spotted dating Lauren Moore. By cheering and supporting him for his upcoming new project Lauren has shown her love and affection towards Aaron.

It is detected that the couple has shown their affection on social media like Instagram. There is no quite dating history of Aaron and Lauren but it seems that they have been dating for a while now.

In the show called Fast N Loud Aaron is better known for his amazing skills for fixing classic cars. He is an American artist and a mechanic who has a net worth of 3 million dollars.

Similarly, he started his personal “Main Street Shop” which will definitely help him to make enough money in the future and there is no doubt that he will have a luxurious life.

During the working time in his garage, Richard Rawlings asked Aaron to fix his car. He was amazed by Aaron’s work and hired him to work in his newly opened hot road shop. Richard and Aaron searched old worn down cars and restored them to give their lost precious glory in the show.

Due to the current running presidential debate, there were no new episodes of Fast N loud aired but the team provided the viewers new demolition theater and also clips of gas debate monkey throughout the episode.

You may like to read Nikki, fiancee of Alex Reid is pregnant with IVF after five miscarriages!

Gas monkey garage was said to have a mega special show on 8th December. Within two weeks Aaron was set to put his own twist on the machine. But after the work was done Aaron was not seen.

It is found that Aaron was missing during his work but people think that he has left. Right now the thing which is breaking the internet is Aaron’s sudden decision in working in ‘Gas Monkey Garage’.

It was confirmed by Richard Rawlings that as the show ‘Fast N Loud’ is supposedly coming to an end as Aaron is leaving the show.

About to get real! #cota #motogp

He thanked Aaron for his 13 years long hard work and dedication towards Gas Monkey Garage and poured his best wishes for Aaron for his further future activities.

Also read The spokesperson for the dog walking app, Olivia Munn updates her Reddit fans about the missing dog from Battery Park!

By Aaron’s profession, he presents himself to us as an American actor, reality star, mechanic, and fabricator. He was born on January 26, 1982, in Texas U.S. He is currently 34 years of age. He was raised in Crowley, Texas with his family but there is no news of him having any siblings. He is best known for his involvement in Discovery’s TV series “Fast N’ Loud”. More bio…

“I don’t hunt ghosts, I communicate with them”-Zak Bagans’ paranormal investigation, his tattooed body and his lifestyle! Read on all that here!
Tags : Actor mechanic and fabricator Reality Star