Aaron O'Connell is an American Actor and Model.

Aaron O’Connell is married to his girlfriend, model Natalie Pack. They married on July 21, 2018, at Lake Como in Italy. Before that, he was engaged with her on September 4, 2017.

Since then, the couple is happy together till now for 3 years. They are not planning for a child yet. 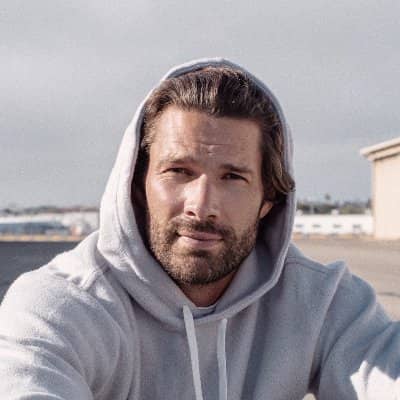 Who is Aaron O’Connell?

Aaron O’Connell is an American Actor and Model. He has made his appearance in various Films and Magazines.

Likewise, he is popular for portraying the role of Wyatt Cryer in the prime-time television drama The Haves and the Have Nots.

His parent’s name is father, Mark Alan O’Connell, and his mother, Kathryn Deeble O’Connell. Aaron’s father is a former football player for the Cincinnati Bengals. Likewise, he has three sisters namely Amy, Abby, and Anna. He grew up in Ohio. Aaron was interested in sports and also used to play piano from his early days.

He is of American nationality and his ethnicity is Caucasian. Further, his birth sign is Aries.

Aaron completed his graduation from Cathedral High School in 2004 and used to play football, basketball, and baseball at the same time. Likewise, he received a bachelor’s degree in Health and Fitness from Purdue University’s College of Health and Human Sciences in 2008.

Aaron started his career as a model. During his collegiate days, he signed to Ford Models in 2006. Since then, he has graced major publications like GQ, Vanity Fair, Vogue, Vogue Paris, Arena Homme + VMAN.

Apart from modeling, he started his career as an actor when he appeared as Jogger in the 2013 movie ‘LAID: Life as It’s Dealt.’

His career skyrocketed after he portrayed the role of Wyatt Cryer in the prime-time television drama, The Haves and the Have Nots.

Some of his notable movies include, 12 Gifts of Christmas, The Prince for Christmas, Lethal Weapon, Black Water, This Is Our Christmas, and Runnin’ from my Roots among others.

Of all his movies, performances, and modeling why not Aaron is living a lavish life. He has an estimated net worth of $4 million as of 2022. Likewise, Aaron is a dedicated and hardworking person who is focused on his professional career.

There are no rumors and controversies about his personal life or professional life. Likewise, Connell is the kind of person who always tries to mark his place in the showbiz industry.

Aaron stands 6 feet 1 inch tall and weighs around 85 Kgs. Similarly, he has a well-shaped body. He has Brown hair and Light Brown color eyes.

Matthew Rolph
Tags : Actor Model The Haves and the Have Nots