Aarón Sanchez is an American celebrity chef. Aarón was married to Ife Sanchez Mora(2009–2012). He is the father of two children.

Aarón Sanchez is currently single. There is no information about his love life relationships.

Aarón Sanchez was married to his longtime girlfriend, Ife Mora. The couple tied the knot in 2009 and it was a private affair. Aaron and Ife met during their work and they were married for around three years.

But after three years of their wedding, his wife, Ife filed for divorce due to irrecoverable differences.

They legally separated in 2012. He has two children, Yuma Sanchez, and Sofia Piana. Currently, he is residing with his children. 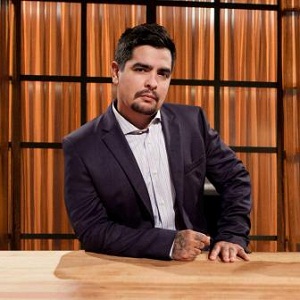 My mother and my grandmother are pioneers of Mexican cuisine in this country, so I grew up in the kitchen. My mom, Zarela Martinez, was by far my biggest influence and inspiration - and toughest critic.

When I was a teenager, I worked in New Orleans for a chef named Paul Prudhomme. That was a very important time in my life as a chef. I developed my palate and learned a lot. And here I am now. I specialize in modern Mexican and contemporary Latin cuisines.

I wanted to get away from the Mexican vernacular and do more 'nuevo Latino.' Americans are starting to understand regionality in Mexican food. It is very regional in terms of ingredients.

Who is Aarón Sanchez?

Aarón Sánchez is an award-winning American chef and television personality. Sanchez is part-owner of the Mexican restaurant Mestizo in Kansas City, Kansas.

He is also renowned for the different styles of cooking like Cajun cuisine and Louisiana Creole.

Aarón Sanchez was born in El Paso, Texas in February 1976. His ethnicity is Mexican.

His mother’s name is Zarela Martinez and his father’s name is Adolfo Sanchez. He has a brother named Rodrigo Sanchez and he does not have any sisters.

He started working at age sixteen with chef Paul Prudhomme.

Sanchez attended The Dwight School and he graduated from the same school. In 1996 he joined Johnson & Wales University in Providence, Rhode Island to study culinary arts.

During his career, Aarón Sanchez appeared on Iron Chef America. Although he had one of his battles ends in a draw in season 2. In addition, Sanchez also competed in The Next Iron Chef.

Likewise, he co-hosted the television series Heat Seekers with Roger Mooking and has been a frequent guest judge on the Food Network series Chopped.

He wrote the book La Comida del Barrio: Latin-American Cooking in the U.S.A. in 2003.

In 2017, he joined Masterchef US Season 8 as a judge with Gordon Ramsay and Christina Tosi, replacing Graham Elliot, to taste and help judge contestants’ cooking with Chef Gordon and Chef Tosi in order to be the next Masterchef. Sanchez is an expert in a lot of cooking techniques and global cuisines.

In 2019, he guest-starred on the first episode of Gordon Ramsay’s 24 Hours to Hell and Back Season 2 as an extra expeditor and even revealed he lives nearby The Trolley Café in New Orleans, U.S.

He announced he will be releasing a memoir titled Where I Come From Life Lessons From a Latino Chef, on October 1, 2019.

He guests judged a Mexican food challenge on season 19 of Hell’s Kitchen in 2020.

As of 2022, This chef has a net worth of $4 million but his salary is not revealed yet. However, seeing his lifestyle, he has a decent amount of income.

Aarón Sanchez has quite good looks and a charming personality. He has black hair and brown hair.

He has an average height of around 5 feet and 8 inches.

His weight and shoe size are unknown.

Who is Ana Lorena Sanchez?? Explore more about her childhood, career, net worth and personal life here!!