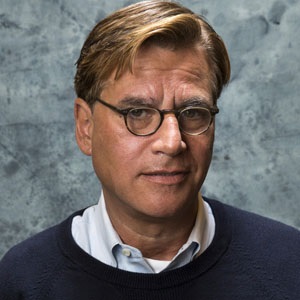 Decisions are made by those who show up

I grew up in the theatre. It's where I got my start. Writing a television drama with theatrical dialogue about the theatre is beyond perfection

Good writers borrow from other writers. Great writers steal from them outright

Aaron Sorkin married Julia Bingham in 1996 and divorced in 2005. The reason for the divorce is said to be his workaholic habits and drug abuse.

Sorkin and Bingham have one daughter, whom they named Roxy.

Who is Aaron Sorkin?

Aaron Sorkin is an American screenwriter, producer, and playwright. He is best known for his works in the Broadway plays A Few Good Men and The Farnsworth Invention.

Also, he did television series such as Sports Night, The West Wing, Studio 60 on the Sunset Strip, and The Newsroom and the films The American President, Charlie Wilson’s War, The Social Network, Money ball, and Steve Jobs.

Aaron Sorkin was born in Manhattan, New York City on June 9, 1961. His nationality is American and his ethnicity is Ashkenazi Jewish.

He has a sister, Sorkin Deborah, and a brother, Noah Sorkin. Both his siblings studied become law.

After graduating from Syracuse University, Aaron Sorkin moved to New York where he spent much of the 1980s as a struggling, sporadically employed actor who also worked odd jobs, such as delivering singing telegrams, driving a limousine, touring Alabama with the children’s theater company Traveling Playhouse, handing out fliers promoting a hunting-and-fishing show, and bartending at Broadway’s Palace Theatre.

One weekend, while housesitting at a friend’s place he found an IBM electric typewriter, started typing, and felt a phenomenal confidence and a kind of joy that he had never experienced before in his life. He continued writing and eventually put together his first play, Removing All Doubt, which he sent to his old Syracuse theater teacher (Arthur Storch) was impressed.

In the 1990s, Sorkin worked under contract for Castle Rock Entertainment. He wrote the scripts for A Few Good Men, Malice, and The American President.

It was broadcast by Warner Bros. This TV show went on to win nine Emmy awards and also many praises for writer Aaron. In the year 2005, he revived his famous play “A Few Good Men”, which was premiered at a theater in London. The show was well applauded by the audience.

In 2007, Sorkin returned to the cinema. This year he releases the film “Charlie Wilson’s War” which boasted of a star cast like Tom Hanks and Julia Robers. Later he also co-wrote the screenplays for the movies “Moneyball” and “The Social Network”. He has completed the screenplay for a yet-to-be-named biopic on Steve Jobs. The film will be directed by David Fincher, who is keen on casting Christian Bale as Jobs.

Concerning the net worth and salary, he earns money from different sources and has an estimated net worth of $90 million but his salary is not revealed yet.

Unlike other celebrities, there are no rumors about the love life of Aaron Sorkin and his professional life as well.

Aaron Sorkin has a height of 6 feet 2 inches tall and weighs 86 kg. His hair color is golden brown and his eye color is brown.

Who is the best kisser according to the supermodel Paulina Porizkova?