Aaron Tveit is an actor and singer widely famous for his role as Gabe Goodman.

Currently, the actor is Aaron Tveit is single.

Aaron dated Jacqui Polk from 2005 to 2008. Polk is also an actress. They met on the sets of his Broadway musical debut, Hairspray. They dated steadily for more than two years and get separated.

He also dated Samantha Massell in 2016. But their relationship ended after a year. 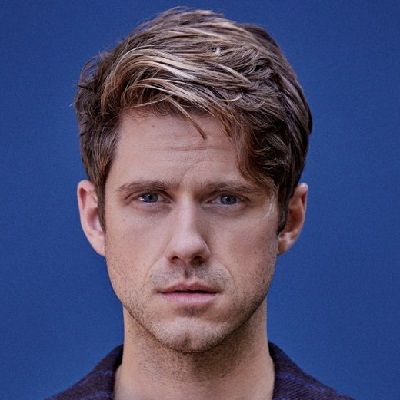 I can clap with one hand.

Life is very, very great. I have no complaints.

Who is Aaron Tveit?

Aaron Tveit is an American actor and singer. He is widely famous for his role as Gabe Goodman in Next to Normal and as Frank Abagnale Jr in Catch Me if You Can. He played the main role in all the 3 seasons of the Graceland TV series from 2013 to 2015.

Tveit won the MTV Movie & Awards for Best Musical Moment in You’re The One That I Want.

Aaron was born on October 21, 1983, in Middletown, New York, USA. His father’s name is Stanley Tveit and his mother’s name is Posie Tveit. Aaron comes from Norwegian ancestry.

He also has a younger brother whose name is Jon Tveit. Jon is 5 years younger than him.

Aaron studied at Middletown High School where he actively participated in several sports as well as theater. He graduated in 2001.

He turned down scholarships to several business schools to take admitted to Ithaca College and studied liberal arts. His first year major was a vocal performance (music) and he switched to musical theater (drama) in the second year.

9 years after leaving behind his college education midway, Aaron earned his Bachelor’s degree (BFA) in 2012.

After two years of leaving Ithaca College, he joined the national tour of Rent as Steve. He there receives the chance to cast as Link Larkin in the first national tour of Hairspray. Then his  Broadway debut started in 2006.

He was seen in many theatre performances such as Saved! Playwrights Horizons. In 2008, Next to Normal in 2010 in Second Sage Theatre, Arena Stage, Booth Theatre, Wicked in 2008-2009 in Gershwin Theatre, Catch Me If You Can in 2009 in 5th Avenue Theatre, Assassins in 2014 in Menier Chocolate Factory.

He has been seen in many television roles, but the most significant to date is William ‘Tripp’ van der Bilt III on The CW’s teen drama series Gossip Girl.

He has also been seen on Ugly Betty, Law & Order: Special Victims Unit, Body of Proof, The Good Wife, Graceland, and Grease Live. Aaron got his first role in a film in 2008 in Ghost Town.

Later he went on to be seen in Girl Walks into a bar, Premium Rush, Les Miserables, Undrafted, Big Sky, and more. From 2017-19, the actor was a cast in the TV series The Good Fight.

Tveit hosted the 2016 Stockings with Care Benefit Gala at the Bowery Hotel Ballroom.

Aaron Tveit’s net worth is $1.5 US million. Likely, he has worked in a number of movies and TV series from which he receives a good amount of money. Tveit’s average salary is around $51,000 US a year.

Aaron is doing well in his professional career as well as in his personal life. He has not been part of any big rumors and controversy.

Next a Normal actor has a height of 6 feet and weighs around 78 kg. He has dark blond colored hair and blue eyes. Moreover, his body specifications are Chest (40 in), Arms / Biceps (15 in), and waist (32 in).

He is not active on Facebook but there are fan pages made in his name. Aaron is active on Twitter since August 2015.