Talking about her relationship, Aaryn Smiley is presently single and is not dating anyone. She might be busy with her career and education at the moment.

Moreover, Aaryn has not revealed her relationship details or affairs news to the public yet. Smiley seems to be very private in nature and has maintained her profile low-key. 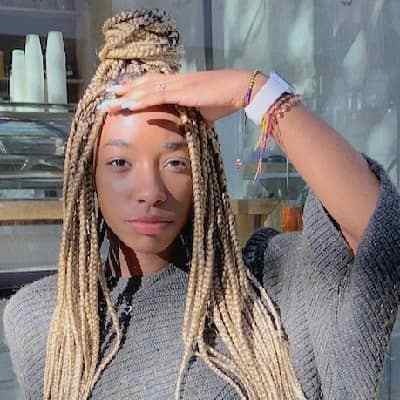 Who is Aaryn Smiley?

Moreover, she has earned good numbers of fan following on her social media accounts.

Aaryn Smiley was born on 4 July 2001. At present, her age is 19 years old. Likewise, her birthplace is Houston, Texas, the USA.

Aaryn is the daughter of her father, Rickey Smiley whereas her mother’s details are still behind the curtain. Moreover, she has three brothers named Malik Smiley, Craig Smiley, and Brandon Smiley, and a sister, D’Essence Smiley.

Talking about her nationality, Smiley holds an American identity whereas her ethnicity is African American.

Regarding education, the star attended The Village High School in Houston. She graduated in the year 2019 from high school. Presently, she is studying medicine and health at Baylor University.

Aaryn is a social media star. She has emerged on TV One reality series, Rickey Smiley for real. The shows record the life of comedian and radio show host, Rickey Smiley. Smiley featured in the year 2018 in season five.

On the other hand, talking about her father’s career, Rickey is a well-named American comedian, TV star, host, and radio personality. He has featured in TV series like Def Comedy Jam, at the Apollo, and Snaps.

Additionally, Smiley has also performed in the movie, Friday After Next. Then, he hosted the 200 seasons of BET’s ComicView program. The star has won the 2017 Marconi Award from the National Association of Broadcasters for the best network. He was also nominated for the Vision Award in 2014.

The star was shot several times during an alleged road rage incident. It took place in Houston over the 4th weekend of July. She was not involved in the incident but was caught in a crossfire. Her dad, Rickey tweeted that Aaryn had a victorious surgery and recovered well.

In the beginning, she thought that the gunfire had been fireworks and thought she was hit by a stray spark. Later, her leg was wounded by a bullet and was carried to a nearby hospital.

However, the star kid has not disclosed her exact salary, earnings, and assets details till now.

Aaryn has never been part of any controversial matter or rumors till now. The star has been preoccupied with her professional and private life.

It seems that Smiley prefers enjoying her personal life and does not want to merge it with her professional life.

19 years old star, Aaryn has gorgeous looks and an admirable personality. She stands at a height of 5 feet 3 inches. Also, she has a balanced bodyweight of 51 kg.

Furthermore, Smiley has black eyes whereas her hair is blonde.

Regarding her social media presence, Aaryn Smiley is an active personality on social media. Aaryn has more than 62.1k followers on her official Instagram account @ryn.smiley.

She is also active on Twitter with nearly 2.2k followers.

Moreover, Smiley is also available on Facebook at the moment.