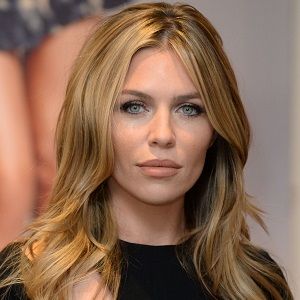 I can't stop staring at my beautiful new baby.

I'm from a normal household. I haven't always had millions to spend on creams and clothes. I like something that's affordable, but good quality. With Avon, it's really accessible, and everyone loves it. It's a brand that you can rely on.

I love to read, and I love Martina Cole.

Abbey Clancy and Peter Crouch are the parents of four!!

Abbey Clancy has had a love relationship with footballer Peter Crouch since 2006.

No sooner they were dating each other and were spotted together in different places.

The couple engaged in July 2009. On 30 June 2011, the couple tied the knot and get married at Stapleford Park Hotel in Leicestershire.

They had their first daughter Sophia Ruby on 14 March 2011.

Then on 1 June 2015, they have their second daughter Liberty Rose.

Again she became a mother for the third time with her son Johnny Crouch.

Later, on January 3, 2019, the couple announced that they were expecting their fourth child. Their second son was born on June 3, 2019.

Who is Abbey Clancy?

Abbey Clancy is an English lingerie and television personality.

She is also a catwalk model recognized worldwide for her beauty and expertise in her field.

She is also the runner-up of  Britain’s Next Top Model and Cycle 2. And in 2013, she won the 11th series of Strictly Come Dancing.

She also has siblings in her family, Elle Clancy, and John Clancy.

Her nationality is British and her ethnicity is Mixed (Irish and English). Information about her educational history is unknown.

Abigail starts her career as a model when she joins the second cycle of Living TV’s Britain’s Next Top Model in 2006.

There she was one of the thirteen finalists in the competition. She couldn’t win the show but it provided her with a great start for her modeling career.

After she got out of that show, she received different modeling offers and appeared in a different show.

And also modeled for various newspapers and magazines.

She has worked for Triumph Bonneville Motorbike in the Daily Mail newspaper.

Arena Magazine’s front cover also has her modeling cover. And in the year 2010 swimsuit edition, she was featured in the Sports Illustrated magazine.

Moreover, Clancy also modeled in an England shirt in the 2010 campaign for Umbro sportswear.

On March 2011 she appears for Elite Model Management: New York Division Website and as a part of the London designer.

Again in Hasan Hejazi’s campaign, she was a fashion editor at Absynth Photographic.

She starred in a fashion film by Gabriel Gettman.

Then in August 2011, she appeared in the cover photo, which was photographed by Solve Sundsbo and also featured in the Love magazine’s Advent Calendar.

She has built her career in acting by appearing in TV shows as a reality TV Star and a host and television presenter.

Clancy voiced in documentaries like Slave to Fashion and The Ultimate Bikini Guide for Channel 4.

The model also has guest-starred in the programs like Richard and Judy, the Chris Moyles Show, Friday Night with Jonathan Ross, GMTV, and This Morning, etc.

Then she appeared in the reality shows Abbey and Janice: Beauty and the Beast, from 14th May to 18th June 2007 on Living TV.

She has also appeared as a contestant in Hell’s Kitchen.

Moreover, she featured and win the Chris Movies Quiz Night on 10th May 2009, alongside Patsy Kensit, and became the winner of the series.

She has built a career co-hosting the ITV2 series, the Fashion show, along with Michelle de Swarte and George Lamb.

Moreover, she appeared on the episode of Blind Date on 22nd December 2009 and was also featured in ITV2’s The Parent Trip, with her mother Karen.

Abbey Clancy: Salary and Net Worth

Her net worth is £3.4 million as of 2022. Meanwhile, her husband Peter Crouch, an English footballer has an estimated net worth of $35 million.

And they must be having a great luxurious life with good earnings. Her salary is unknown.

Abbey seems to have good relationships with all of the people and has a good professional and personal life.

And so there are no rumors about her.

Abbey Clancy has a well-built body with a good appearance.

She has green-colored eyes and blonde colored hair.

Abbey Clancy is active on social media. Clancy has her official account on Facebook and has more than 21K followers.

And then she also uses Instagram and has 474K followers.

Moreover, the model is also active on Twitter and has 374K followers.

Also get to know about the career, net worth, body measurement, and bio of various famous personalities like Andre Silva, Ricky Grover, Julia Chatterley, Aldo Zilli, and Deanna Madsen.