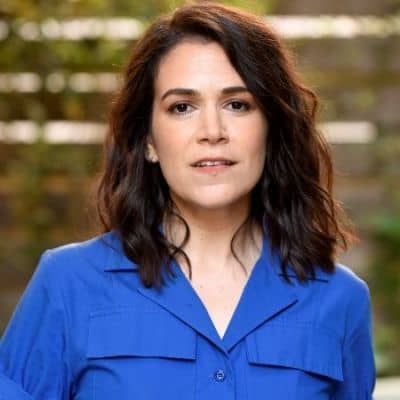 Who is Abbi Jacobson Romantically Linked Up With?

The 38-year-old American comedian and actress, Abbi Jacobson is an unmarried woman. Furthermore, she has also clarified that she is bisexual.

Abbi Jacobson is happily engaged to her longtime partner, Jodi Balfour. She is a South African film and television actress.

The two started seeing each other in October 2020, and are recently engaged in July 2022. They also attended the 2022 red carpet of A League of Their Own in Los Angeles, and Jacobson was even seen wearing a ring on her finger.

Previously, she was rumored to be dating Carrie Brownstein, however, none of them have confirmed their relationship.

Who is Abbi Jacobson?

She is well known for her appearance in the series, Broad City from 2014 to 2019, and has voiced over Katie Michell in the computer-animated series, The Mitchells vs. the Machines in 2021.

The 38-year-old actress was born on February 1. 1984 in Wayne, Pennsylvania, the United States. Abbi Jackosn holds an American nationality while her ethnicity is Caucasian.

Similarly, she was born to her mother, Susan Komm, an artist, and her father, Alan Jacobson, a graphic designer.

As per her academics, she went to Valley Forge Middle School and Conestoga High School from where she completed her schooling. Further, in 2006, she graduated from the Maryland Institute College of Art (MICA) with a  B.F.A. in General Fine Arts.

After graduation, she took classes in the Atlantic Theater Company and the Upright Citizens Brigade Theatre in New York City.

Then, she worked as a writer and even performed in the web series, Broad City from 2009 to 2011 along with her friend, Ilana Glazer. The series describes their lives in New York and got in the nomination for Best Web Series in ECNY Award.

In January 2014, Broad City made its broadcast television premiere and was critically acclaimed. Again the show was renewed for a second season by Comedy Central in February 2014.

On February 17, 2016, the third season of the series premiered. Then, the series went to be renewed for a fourth and a last, fifth season.

She was the writer and performer in a solo show named, Welcome to Camp, which was held in New York and Los Angeles in 2011.

Following that, she starred as Claire in the 2017 drama film, Person to Person. Dustin Guy Defa is the writer and director of the film sharing the screen with Philip Baker Hall and Michael Cera.

As a voice actor, she voiced Bean in the American fantasy sitcom, Disenchantment by Matt Groening. Abbi also voiced Katie Mitchell in 2021 computer-animated science fiction, The Mitchells vs. the Machines.

She published another book, Drawings, Vulnerabilities, I Might Regret This: Essays, and others.

What is the net worth of Abbi Jacobson?

According to Celebrity Net Worth, Abbi Jacobson has an estimated net worth of around $6 million.

She has not shared any info about her earnings, her annual salary and weekly earnings are under review.

Is Abbi Jacobson involved in any rumors and controversies?

There is no record of Abbi Jacobson being involved in any rumors and buzzes.

Owing to her long professional career, she has not indulged in any part of controversy yet.

Abbi Jackson has dark brown eyes with black hair. Her height is 5 feet 5 inches and her weight is 55 kg.

Moreover, her bust size is 32 inches, her waist size is 25 inches and her hips size is 34 inches.