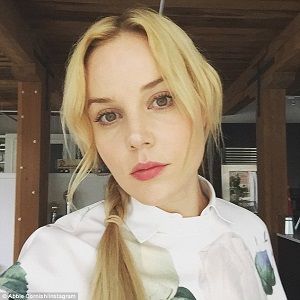 The hardest part is getting your clothes off at first in front of the people who haven't seen you naked before. The first time you get nude in front of someone, it's hard, and then it's, "Well, you've seen everything now

Whenever I am acting, it's everything, you know. If I'm researching a role, I'm completely consumed in that and, between action and cut, I live in this suspended time. It's a really amazing experience and the only other thing I get it from is music.

Previously Cornish was found to be in a relationship with Kid Lyrical who led her crew when she was a rapper but the relationship didn’t last long and the couple broke up. After onwards, she started dating an actor, director, and producer Ryan Philippe.

The couple met on the set of ‘Stop-Loss’ and began dating since 2006. After being in a relationship for several years the couple split up in 2010.

Who is Abbie Cornish?

Abbie Cornish is an award-winning Australian actress best known for her work as Heidi in ‘Somersault’.

She has also appeared in other numerous movies and television sitcoms such as ‘Marking Time’ as Tracey, ‘Wildside’ as Simone Summers, ‘Bright Star’ as Fanny Brawne, and ‘Candy’ as Candy. She is also a rapper.

Born on 07 Aug 1982, in Lochinvar, New South Wales Abbie Cornish is the second child among five children of Shelly and Barry Cornish. She has three brothers and one sister.

Her sister Isabelle Cornish is also an actress. Later they moved away and started living in Melbourne, Victoria. She learned driving when she was 12 years old.

Cornish skipped ‘Year-8’ in high school being fascinated by foreign films. Being grown up near animals she has become a vegetarian at the age of 13 and at the age of 16, her parents split up.

Her ethnicity is unknown.

At the age of 13, Abbie Cornish had started her journey as a model. She was the finalist in a modeling competition for Dolly magazine. She debuted in the acting industry from the television series ‘Wildlife’ performing her character as Simone Summers.

This actress won the Australian Film Institute: Young Actor’s Award for her acting skills from her debuted series. She started engaging in other shows and later appeared in the movie ‘The Monkey Mask’ portraying her character as Mickey Norris in 2000. Cornish was known to the world when she got to show her skills as a leading actor in ‘Somersault’ as Heidi.

She won numerous awards from the movie including the Miami Film Festival: Breakthrough Award, Best Actress at the Australian Film Institute Award, Film Critics Circle of Australia Award, and Inside Film Award. She has appeared in many television sitcoms and movies spreading her wings equally at ease with both forms of media.

Besides her acting career, she is also an outspoken advocate for animal protection. She became ambassadors for the Australian animal rights group Voiceless, The Animal Protection Institute. She is also a rapper who is mostly known as Dusk on the stage.

Cornish has also given her voice for the movie ‘Legends of the Guardians: The Owls of Ga’hoole’ as Otulissa. She announced that she will be singing with an American rapper Nas on his Australian tour. In 2015, she has launched her two tracks ‘Evolve’ and ‘Way Back Home’ for free on SoundCloud.

She has also won Australia’s Sexiest Vegetarian in 2008. Although her salary has not been disclosed, her net worth is said to $8 million living a luxurious lifestyle. Cornish also appeared in two movies ‘Geostorm’ and ‘The Billboards Outside Ebbing, Missouri’.

In July 2017, she had hinted that she would be leaving the US. It was also said that she had removed her facial mole by plastic surgery.

You may also check out the age, parents, career, net worth, body measurements, and social media of Scotty T, Julie Anne San Jose, and Shaun Keaveny