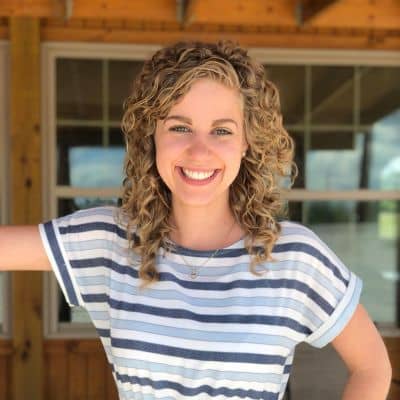 Abbie announced she is dating John Duggar on 26 June 2018. The couple met at an event at Abbie’s church in Oklahoma. Later, Duggar surprise Abbie when he showed up at her family’s home on 17 July 2018.

Along with his two sisters, the couple flew to Fredericksburg, TX, where John proposed to her. Abbie accepted his proposal and they publicly announced their engagement on 25 July 2018.

Later in the same year, they tied the knot on 3 November 2018. Their wedding took place at Abbie’s family’s church, First Baptist Church of Ada, OK. The couple also welcomed their first child named Grace Annette Duggar on 7 January 2020 who weighed 7lb, 11oz, and was 20.75 inches long.

Who is Abbie Duggar?

Moreover, she is a licensed practical nurse in Oklahoma and her license was issued on 7 August 2017.

Abbie Duggar was born on 16 April 1992. At present, her age is 29 years old. Likewise, her birthplace is Arkansas, the United States.

Abbie is the daughter of her father, John Burnett whereas her mother is Cheryl Burnett. Moreover, she has four sisters named Hannah, Charity, Maggie, and Carinna whereas her three brothers are John-Clay, Caleb, and Benjamin.

Talking about her nationality, Duggar holds an American identity whereas her ethnicity is Caucasian.

Regarding education, the star was homeschooled in the Institute of Basic Life Principles program and attended the yearly conferences in Big Sandy, TX. She also attended the Wilds Music Camp in Brevard, NC.

Abbie then started training to be a certified nursing assistant(CNA) in 2013 and completed her training in October of 2014. The star also studied nursing at Pontotoc Technology Center from 2016 to 2017.

Abbie is a multi-talented professional. She has taught in the Children’s Institute for conferences with the Advanced Training Institute. She also taught in a number of other ATI conferences as a young adult.

Later, she earned her CNA(certified nursing assistant) in October of 2014 and began working at a nursing home in Oklahoma.

The star moved to Arkansas after getting her license and has currently put her nursing career on hold but she is still continuing her education hours to keep her license active. Abbie has also featured on the final season of the reality show in Counting On, Josiah, and Lauren’s Prank-less Wedding? on 1 October 2018.

On 20 November 2018, Duggar was featured in John David & Abbie’s Wedding that aired on the TLC website. These webisodes gave viewers a sneak peek at Abbie’s wedding to John Duggar. Abbie’s relationship with John is one of the prime subjects of the show’s ninth season that featured on 11 February 2018.

A famed multi-talented personality, Duggar has earned a handsome amount of money from her profession. She lives a lavish lifestyle along with her family.

However, the nurse has not disclosed her exact salary, earnings, and assets details till now.

Abbie has never been part of any controversial matter or rumors till now. The star has been preoccupied with her professional and private life.

It seems that Duggar prefers enjoying her personal life and does not want to merge it with her professional life.

29 years old star, Abbie has beautiful looks and an admirable personality. She has not mentioned her exact height but seems to be more than 5 feet tall.

Furthermore, Duggar has blue eyes whereas her hair is blonde.

Regarding her social media presence, Abbie Duggar is an active personality on social media. Abbie has more than 605k followers on her official Instagram account @johnandabbie.

John Duggar and his girlfriend Abbie are engaged! Duggar parents are elated!