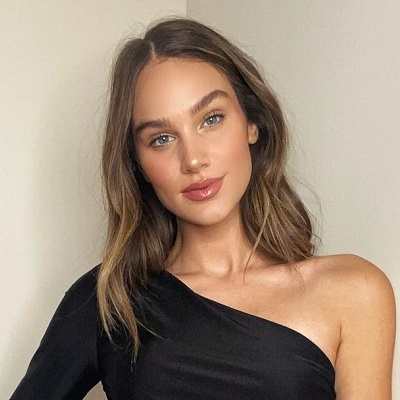 Abbie Herbert is happily married to Josh Herbert. Her husband, Josh is a music artist originally from Pittsburgh.

The couple started dating in November 2015. However, they first met in the year 2013 at the set of Josh’s music video. After dating for four years, they got married in August 2019. Currently, the couple is excepting their first baby.

Who is Abbie Herbert?

American Abbie Herbert is a model, TikTok Star, and YouTuber. Herbert is renowned for her TikTok videos that went viral on the web.

Abbie Herbert was born on 15th July 1996 in the United States. She is of Mixed (Germanic, Dutch, British, and French) ethnicity.

To date, she has not shared any details on her family background including father, mother, and siblings. Also, details on her academics are not available.

Her Journey as a TikTok Star in January 2020 when she uploaded her first video where she showcased her dress. The video went viral with 180.2k plays with around 9.7k comments.

In middle, her husband also made his appearance on her videos playing music and dancing with each other. Such a bond between the couple happens the center of attraction of her TikTok videos.

On 23rd June 2020, she uploaded her TikTok video named, Joke On My Husband. The video received 12.3 million plays with 1.8 million likes and became one of the most liked TikTok videos.

In the present day, the couple is mostly making their contents related to the baby as they are expecting. Currently, she has 5.3 million followers on her account with 306.6 million likes.

Besides being a TikTok Star, she is also a YouTuber. Along with her husband, Herbert, she shares runs the YouTube channel, The Herbert’s. They started the channel on 3rd July 2015. However, they started posting in April 2020.

On their channel, they mostly share vlogs, challenge videos, and their life update with the audience. Currently, they have 774k subscribers with 14.8 million views. Also, she is a model. As a model, she is associated with the modeling agency, NEXT Models.

As of 2020, she has an estimated net worth of $500 Thousand. Through her per video post in TikTok, she makes in the range of three digits.

She has blue eyes with brunette hair. She stands at a height of 5 feet and 3 inches and weighs around 53 kg.

She is active on Instagram with the handle, abbieherbert_ with 553k followers.

On the platform, she is following the personalities like Josh Brueckner, Liz Mace, and Shawn Johnson. Also, she has 1.12k followers on Twitter.