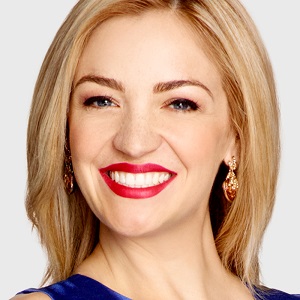 I'm not a stand up at all, it's such a fear of mine. My sister does it, and she's really great at it: There are some different things I'm writing and developing, but I don't know where they'll go. They're fun stuff that I would be in and are written in my voice, for me

I think you have to create your own stuff so I'm working on stuff for myself right now.

What is the relationship of Abby Elliott?

Abby Elliott is a married woman. She has been married to television writer Bill Kennedy since September 3, 2016. They married in Eastern Connecticut following an 11-month long engagement.

Previously, she was in a relationship with her fellow ‘Saturday Night Live’ cast member Fred Armisen in 2010. But the duo ended their relationship in September 2011.

Who is Abby Elliott?

Abby Elliott is an American actress and comedian. She is popular for being the cast member of ‘Saturday Night Live for four seasons from 2008 to 2012.

She has a sister named Bredy. Her ethnicity is mixed (English, Scottish, German, remote French).

She joined Immaculate High School in Danbury, Connecticut, and graduated from there. During that period, she acted in school plays and musicals. Then, she attended Marymount Manhattan College in New York but she dropped out during the first semester.

Then, she took comedy classes at The Groundlings and then started performing in different theaters in Los Angeles.

She finds time for training and healthy nutrition has a hectic schedule and visits a gym at least 5 times a week.

Abby Elliott made her appearance with the supporting roles for the pilots ‘You’ve Reached the Elliots’ and ‘Chrisy: Plain & Simple. Both of the sitcoms stared at her father. Along with her sister, she performed comedy in theaters.

She performed the voice roles on ‘King of the Hill’ and ‘Minoriteam’ and has been featured in a number of Late Night with Jimmy Fallon sketches as ‘Jersey Floor’ and ‘Studio 6-Bee’.

She debuted her film career with the small role in ‘No Strings Attached’ and played the supporting roles in the films High Road’ and ‘Fun Size’.

Abby made her guest appearance on television programs such as ‘How I Met Your Mother, ‘2 Broke Girls, ‘Happy Endings, and ‘Inside Amy Schumer’. She co-starred in the series ‘Odd Mom Out’ from 2015 to 2017.

It seems she has not been awarded and nominated in her profession to date.

She has an estimated net worth of around $2 million as of 2022, and her main source of income is from her professional career.

It was heard that she will play along with Adam Pally in the NBC comedy pilot ‘Uninsured’ and she will be playing the role of Adam’s wife.

To know more about Ilana Glazer, Steve Burton, and Brooke Anderson, please click on the link.