Abby Huntsman is a reporter of ABC's 'The View.' She has also worked on Fox News Channel and is an author of WHO WILL I BE? Abby is married and has three children with her husband. 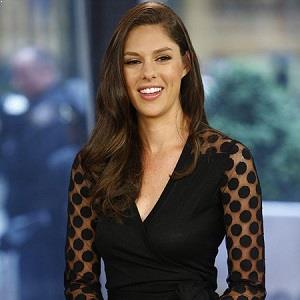 You can only be your best self. When I initially got on the air, I would look around me and watch people that I thought were really good and try to be like they were. And I got to a point where I realized, "I can't be them." I can only be the best that Abby can be. And as long as I'm myself and I'm genuine and I'm real, then I think that's all you can do.

You never know what's going to happen, so I get up at 6 a.m. every morning. It's a new wakeup call for me, for sure. But you just want to be polished. That way, if anything happens, I'm ready to go. I'm not going to sit in a makeup chair for an hour and be like, "Then I'll go get the story."

What is the relationship of Abby Huntsman?

The couple since then has lived a happy and successful married life without any divorce rumors.

Her husband works at a private equity firm named Kohlberg Kravis Roberts. The couple has a daughter, Isabel Grace Livingston born in 2017.

Abby announced on television that she is pregnant with twins: a girl and a boy in January 2019 and in June their twins, Ruby, and William were born.

Who is Abby Huntsman?

Abby Huntsman is a general assignment reporter for Fox News Channel. Currently, she is the co-host of ‘Fox & Friends Weekend’.

Previously, he was previously a political commentator and co-host on ‘The Cycle’ which aired on MSNBC.

Abby was born in Pennsylvania, the United States on May 1, 1986, to Jon Huntsman Jr. (father), and Mary Kaye Huntsman (mother).

During her childhood, she worked a behind-the-scenes position at ‘Good Morning America’ and disliked it so much that she contemplated giving up on television forever.

Furthermore, she is of American nationality. Additionally, she has a mixed ethnic background of English, Scottish, Norwegian, Swedish, Danish, distant Swiss-German, Dutch, and remote French Huguenot.

Abby Huntsman spent most of her early life in Asian countries, including Taiwan and Singapore.

Talking about her education, Abby attended the University of Pennsylvania. Later, she graduated from there in 2008. She has a degree in Philosophy, Politics, and Economics (PPE).

Initially, Abby worked a behind-the-scenes position at ‘Good Morning America’. Later, she interned for Diane Sawyer. Next, she appeared as a political commentator for ABC News in Washington, D.C., and ‘Good Morning America’ in New York City in 2012 during and after her father’s presidential campaign.

Additionally, she also held a position at the international public relations firm Burson-Marsteller.

Abby joined ‘The Cycle’ in July 2013. Eventually, she left the show after it was canceled in July 2015. Next, she became the host/producer for HuffPost Live.

Additionally, she appeared as a guest on CNN. Abby Huntsman later joined Fox News Channel as a general assignment reporter in October 2015. Currently, she covers the news of the day across the network’s daytime and primetime programming.

Abby worked on her father’s 2012 campaign as a media advisor and surrogate. In addition, she earned attention for her social media presence during the time.

After Sara Haines left the 22nd season of the show, The View, Abby joined.

Abby Huntsman has an estimated net worth of $20 million as of 2022. Furthermore, she has not revealed her current salary.

There was a rumor that Abby is pregnant with her first child. This rumor later turned out to be true after she made the announcement on her show that she is, in fact, expecting her first child.

Furthermore, her interview with Gianno and Wendy Osefo attracted a fair amount of controversy in August 2017. People accused her of being tone-deaf in the face of a hugely emotional and moral story during the interview.

In January 2020, rumors were that The View reporter Abby left the show because of the feud with her co-host, Meghan McCain. However, they have not agreed to the rumors.

Talking about her body measurement, Abby Huntsman has a height of 5 feet 8 inches (1.73 m). Additionally, she weighs 58kg.

Huntsman is quite active on social media. She has a huge number of followers on social networking sites such as Twitter and Instagram.