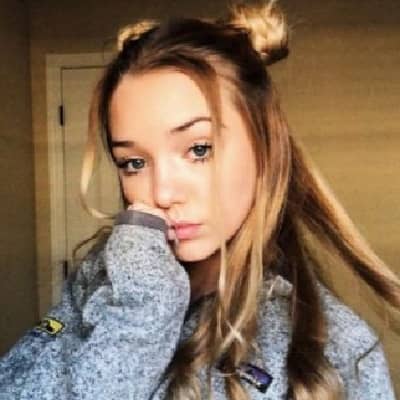 Abby is still young to be in any relationship. She is more focused on building her career right now.

And so her relationship status is single at the moment.

Who is Abby Ritter?

Abby is a TikTok creator who has earned over 240K fans to her abbyrritter account. The star is well known for her comedic content, dance videos, and lip-syncs. She also has a huge fan following on her YouTube and Instagram accounts.

Abby was born on May 25, 2002, in the United States. She holds an American nationality and her ancestry is of Germanic origin.

Her parents’ names aren’t disclosed. But she seems to be close with her family members. On the auspicious day of father’s day, she shared her love for her father through her Instagram post. Her father has his Instagram account named, teamofritters. It has different posts along with the family members.

Likely, she has also wished her mother with another Instagram post on mother’s day. Abby is one of nine siblings, Bri, Rylee, Sabrina, and others. She seems to be very close to them.

Abby is currently studying in Saugus High School Varsity. Moreover, she was in the cheerleading team of her high school.

Since then she has been uploading various pranks, challenges, reactions, comedy videos, and vlogs. “ME AND MY FAMILY ALMOST DIED? STORYTIME! *WARNING* VERY SAD!” was the most popular video on her channel with around 3.5 million views.

Abby wasn’t posting any content from last year. On Aug 15, 2020, she has her comeback with the video, “trying to get TikTok famous overnight”. At the moment, her channel is growing day-by-day and she is doing great in her career.

Similarly, she is also one of the rising TikTok stars. She joined the app musical.ly, which later became TikTok, in July of 2015, early in the life of the app. Her first featured video on TikTok featured a song called “Old Guitar” by BUNT.

The star has earned over 244 fans to her abbyrritter account by posting various comedic videos and lip syncs.

Abby is just in her initial stage in building her career. She must be earning some money from her internet career, streams, and different promotional posts.

Yet her net worth is under review. Surely it will be growing in the upcoming days.

The star has focused on building her career and hasn’t involved in any activities that cause her name to appear in the media as certain rumors or controversies.

The star has an average height of 5 feet and 6 inches. Similarly, she has a beautiful face with blonde colored hair and hazel colored eyes.

Likely, her official TikTok account also holds 244K followers with more than 8M likes. Similarly, she has her own YouTube channel with 140K subscribers.

Also, get to know about other TikTok stars like Julia Raleigh, Dayshawn Wilson, Levi Underhill, and Abbie Herbert.