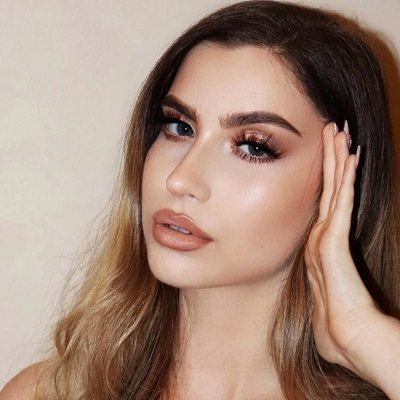 Abby Roberts’ current relationship status is single. There are no previous records of her dating.

Her Instagram posts suggest that the Internet personality is passionate about special effect makeup.

Who is Abby Roberts?

British Abby Roberts is an Instagram influencer and TikTok star. Roberts is renowned for her special effect makeup videos that went viral on the web.

Also, her Instagram posts are popular for her artistic makeup.

Abby Roberts was born on the 27th of July 2001 in England to Phil and Jennie Roberts. They are of Jewish-British ancestry.

She is an elder sister of Charlotte Roberts. Charlotte is also a fellow social media blogger.

She started making TikTok videos in 2019. In her very first video, she showed her talent as a special effect makeup artist which is different from the regular TikTok video. The video earned 76.3k likes on the video.

After that, she was more inspired to make such videos. In the very time span, she gripped the attention of the public with such videos. With the increasing number of videos, her fans and followers on TikTok is at an increasing rate.

As of now, she has earned 4.3 million likes in a video which happens to be the highest likes in her TikTok video.

Prior to the TikTok, she is a YouTuber. On the 19th of February 2013, She created her own YouTube channel. Later, on the 21st of February 2013, she uploaded her first video, an 11-year-old makeup tutorial. The video earned 700k views. The video was the only one video uploaded in the year.

As a YouTuber, she uploads very few contents. Hence, her viewers are carving for more such videos.

Apart from that, she is active on Instagram. In the app, she uploads similar types of contents. As always, her makeup has millions of fans on the social site too. As of now, she has uploaded 750 contents on the site.

She has an estimated net worth of $5ook. As a TikTok star, her earnings per post in TikTok is $3.2k.

Also, her earnings through her Instagram post is in the range of 5 digits with an engagement rate of 14.93%.

Despite being a huge social media star, the Instagram sensation has not been in any sort of controversy that creates a buzz in the media.

She also has a self-titled YouTube channel with 138k subscribers and 2 million views.

The TikTok star is active in TikTok with the handle, @abbyrartistry. She has 6.2 million followers with 233.2 million likes.