Updated On November 15, 2022 | Published By: Thomas Gregory
Share this
In Relation 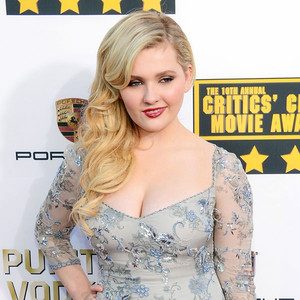 It's cheesy, but having a pimple or a bad hair day isn't going to matter in five years. I don't always remember that, but I try

My mom didn't ever think I would take to acting because I was a very shy, very reserved kind of child. But obviously, something changed!

What is the relationship of Abigail Breslin?

Cute and adorable Breslin is an unmarried woman, however, she is engaged to her longtime boyfriend Ira Kunyansky.

In February 2022, the beautiful couple exchanged rings with each other. Talking about their relationship timeline, they started dating sometime in the year 2017.

Previously, Abigail was rumored to be dating British actor Freddie Highmore in 2016. However, neither actor ever confirmed that had a relationship.

Similarly, she has been in the relationship with Jack Barakat during the year from 2013 to 2014.

On April 2017, she revealed a horrifying secret of her life. In an interview, she told that her ex-boyfriend had raped her. But due to fear of being in news as a victim, she did not report to the police authorities.

After the rape, she was diagnosed with Traumatic Stress Disorder.

Who is Abigail Breslin?

Abigail Breslin is an American actress and singer. She is extremely prominent for the film “Little Miss Sunshine” for which she won 6 awards and was nominated for other 10 awards. She has made a respectable position in the American film and music industry and has earned more fame and fans.

Breslin was born on April 14, 1996, in New York City, New York, U.S.A. Her nationality is American and belongs to a mixed (Irish, Austrian Jewish, and English) ethnicity.

Abigail was born to Ken and Michael Breslin. She was raised with her parents in a friendly and entertaining environment along with her two elder brothers named Ryan and Spencer who are also currently actors.

Abigail was highly interested in the acting and singing field from a very young age and got full support from her parents.

In which school did Abigail Breslin attend?

There is no accurate information relating to her educational background. Also, there was news that she wants to put her career on hold and join New York School. Her friend Chloe Grace Moretz also wants to join her in school.

Breslin started her career at the age of 3 and appeared in a Toys “R” Us commercial. She made her debut in the 2002 film “Sings” as ‘Bo Bess’ only at the age of six.

She didn’t get so much popularity that year; however, in the year 2004, she starred in four films named “Raising Helen”, “The Princess Diaries 2”, “Chestnut”, and “Keane” and was highly recognized among the public and fans.

In the year 2006, she appeared in the film “Little Miss Sunshine” as ‘Olive Hoover’ for which she won ‘Screen Actors Guild Awards, ‘Tokyo International Film Festival Award’, ‘Critics Choice Awards, ‘Critics Choice Awards, and was nominated for other many awards. In 2009, she starred ‘Anna Fitzgerald’ in “My Sister’s Keeper” for which she won Young Artist Award in 2010.

She released her single “Fight For Me” in 2001 and later released other single songs including “Christmas In New York” and “You Suck”.

He has accumulated a net worth of‎ $8 Million as of 2022. But there is no information regarding his salary.

Once, Breslin was rumored to have affair with Michael Clifford in 2013.

It seems like she is doing the best job without harming others for which she hasn’t been a part of controversy yet.

How tall is Abigail Breslin?

Also know more about the early life, career, net worth, relationships, and controversies of other actresses and singers including Brandy Norwood, Malandra Burrows, Andrea Deck, Nazanin Mandi, and Cassandra Peterson.