She is not committed to anyone at the current time. She is currently single.

Hopefully, she may be speaking openly about her relationships in one of the episodes of the show. According to her, Abigail decided to do the show because she was tired of the experiences she was having trying to meet guys on dating apps.

Also, the analyst is eager to step outside of her comfort zone. Likewise, details about her past relationships are also unavailable through any sources of information. 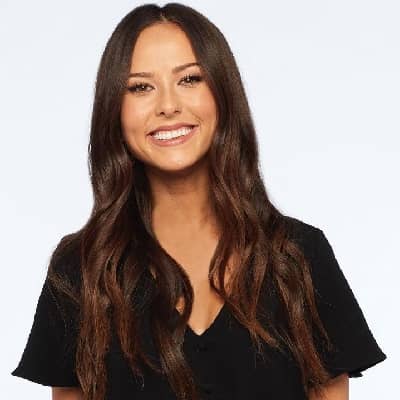 Who is Abigail Heringer?

Abigail Heringer is an American television personality as well as a financial analyst. Currently, Heringer is working at a marketing and events agency called ‘The Opus Agency’.

She could be able to gain fame when she was cast as one of the contestants on the 25th season of the ABC dating reality series, ‘The Bachelor’.

Abigail Heringer was born on March 1, 1995. At present, her age is 26 years old. Likewise, her birthplace is in Beaverton, Oregon, The United States.

Heringer is the daughter of her father, Weston Heringer III whereas her mother is Suzie Heringer. She was raised with her three siblings, an elder sister and two young brothers. They are Rachel, Alistair, and Stuart respectively.

Talking about her nationality, Heringer holds an American identity whereas her ethnicity is Caucasian.

Regarding education, she had joined Linfield College in Oregon. She received a bachelor’s degree in finance from the college. During her high school days, she was an avid golfer.

Initially, Heringer was an intern in social media marketing at Suite 4 in McMinnville, Oregon. In 2016, she worked as a golf shop assistant at Langdon Farms Golf Club. In the same year, she became an audit intern at Umpqua Bank, Tigard, Oregon.

As mentioned above, she works at Opus Agency at present time. She had joined the company in February 2020. Additionally, she could come to the attention of people

when she got involved on the 25thseason of the ABC dating reality series, The Bachelor.

As Heringer has worked in so many companies and organizations, she can earn a good amount of salary. Besides, she has added her source of income by appearing on ‘The Bachelor’ as well.

It is reported that Abigail has an estimated net worth of $1 million as of 2022.

However, Heringer has not made public her exact salary, earnings, and assets details till now.

Abigail Heringer has never been part of any controversial matter or rumors till now.

It seems that she keeps on enjoying her personal life and does not want to merge it with her professional life.

Amazingly, Abigail is a gorgeous person with a slim type of body structure.

Moreover, her height is approximately 5 feet 3 inches. Also, the well-known personality has a balanced body weight of 51 kg.

The exact body measurements of Abigail are 32-23-33 inches. Furthermore, Abigail has hazel green eyes whereas her hair is light brown.

Abigail Heringer with her sister Rachel Heringer has a hearing impairment. Additionally, she wears cochlear implants after being born with congenital hearing loss. Rachel and Abigail underwent successful cochlear implantation surgery when they were just two years old.

About her social media presence, Abigail Heringer is an active personality on social media. Abigail has more than 490k followers on her official Instagram account @abigail_heringer.

She is also active on Twitter with around 16.1k followers.