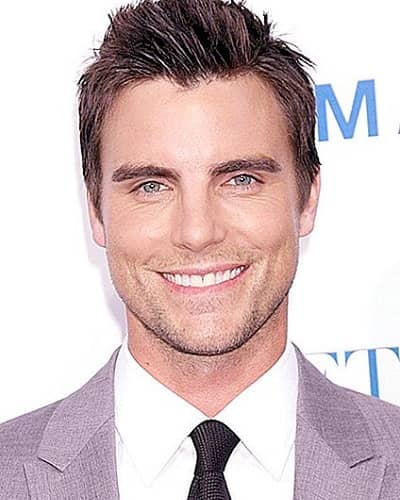 Likewise, he talked about having cancer and went through 2 surgeries for it. He said that he has learned to deal with fear after that. He said,

“You got this and you’re not alone!!’ Together we can make a big impact! Let’s do this!!”

He talks about how he overcame his cancer. He added,

“If you would have told me at 14 that I’d be about to be releasing a book about overcoming all the challenges that life can throw at us then making it onto the biggest stages in Hollywood and beyond, I’d probably have smiled at you through my braces and told you ‘you’re crazy!’ ‘Agile Artist’ pre-order is May 15th! Join this amazing community of supportive and creative impact!, “

His book was available for pre-order on 15th May 2019 online at the bookstore.

Colin was in a relationship with Jennifer Love Hewitt in the year 2012. They dated for a year and broke up in the year 2013. Jennifer is an American actress, singer, songwriter, producer, and director. Similarly, she began her career as a child actress.

Before Jennifer, he dated Stephany Jacobsen. They dated from the year 2009 to 2011. She is an Australian actress. She has appeared on Home and Away, Life on Mars, and many others.

Actor, Colin Egglesfield was born on 9th February 1973 in Farmington Hills, Michigan. He is the son of Kathleen(mother) and William Egglesfield(father). Similarly, he has two siblings Kerry(sister) and Sean(brother). He attended Illinois Wesleyan University after graduating from Marian Catholic High School. Later he transferred to the University of Iowa, where he was in the pre-med program. After that, he dropped his medical career to pursue his career in modeling.

He began his career by signing the modeling contract with Beatrice Model agency in Milan, Italy, and DNA Model Management in New York City. Likewise, after his modeling career, he turned towards acting.

He guest-starred on television series such as Law & Order Special Victims Unit, The $treet, Gilmore Girls, Charmed, and Nip/Tuck. Furthermore, he debuted in the film All My Children starring Josh Madden.

Colin Egglesfield is an American actor and television actor. He is popular for starring as Josh Madden in the long-running soap opera All My Children. Similarly, he did well appearing as Evan Parks on The Client List. More Bio…

Richard T. Jones is on the show The Rookie season 2! Know more about his career and personal life!
Tags : ‘The Client List’ American Actor