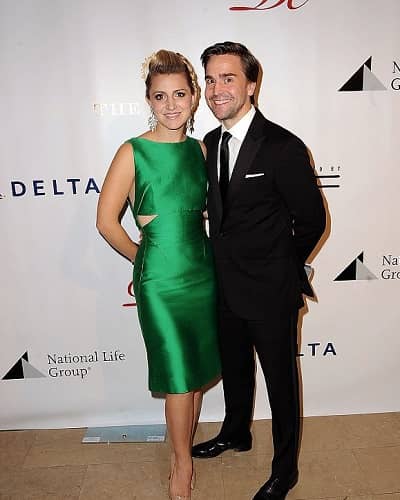 Joe Tappe and Annaleigh Ashford met each other in the year 2006 when they were introduced by Annaleigh’s manager Beth Rosner. They met over lunch.

Annaleigh was touring with the musical “Wicked”, she flew into New York City for an audition and a lunch meeting with her manager, Beth Rosner.

Rosner became a matchmaker more than a manager when she invited another client to lunch. It was none other than an actor named Joe Tapper who was then in his third year of the Master of Fine Arts program in acting at Yale.

“The two of them are fabulous, amazing people, but you could see they needed someone else to illuminate the parts of them that didn’t glow as brightly as they could,”

Joe thought Annaleigh was beautiful and unusually grounded for an actress, but he admitted that he did not have a “this is the one” feeling at the time. He said,

“I was perfect at picking the wrong woman and never having a relationship work out,”

Also read Actress Vanessa Morgan is pregnant with her first child! Insight on her married life with Michael Kopech, net worth, and getting paid less than other casts

Joe and Annaleigh walked down the aisle on 29th July 2013. They wed at Devil’s Thumb Ranch in a ceremony with friends and family. Their close friend officiated the wedding.

During their ceremony the weather was horrible. It rained on and off throughout the ceremony and at one point it poured.

He grew up in an apartment across the street from an amusement park. They had more than 147 guests at their wedding. Joe thought Annaleigh is a positive person.

“She makes me believe good things happen to good people. I owe everything I love about myself now to her.”

Joe Tappe and Annaleigh Ashford announced that they were going to be parents on 11th May 2016. Their son Jack Clark Tapper was born on 8th September 2016. Jack was born at 6:36 AM in Los Angeles he weighed 7 lbs., 3 oz., and measured 21 inches long.

“We are so excited to be having a little boy. Now we’ll finally have a place to put all of Joe’s St. Louis Cardinals memorabilia.”

How much is the net worth of Joe Tappe?

Joe Tappe has an estimated net worth of $500 thousand. He has worked as an actor in Junkyard July, America’s Most Wanted: America Fights Back, Postures, Taxi Brooklyn, Odyssey, Masters of Sex, Chicago Med, Blue Bloods, Henry the 9th, Law & Order: Special Victims Unit, and SCOTUS and the City.

His wife Annaleigh has an estimated net worth of $3 million. Her film roles include Sex and the City, Rachel Getting Married, Top Five, Unicorn Stor, Second Act, Bad Education, and others.

They have a house in Los Angeles, California which is built in 1,859 square feet. It has 3 bedrooms and 3.5 bathrooms. They listed their house for $1.255 million.

The couple purchased the house in 2016 for $1.125 million. It has an open concept living space on the second floor with rustic-luxe wide-plank floorboards.

Their house also incorporates a living room that features a reclaimed brick wall and an impractically slender wrap around the balcony, a dining area with a bar counter, and a well-equipped kitchen with a center island snack bar.

Is Joe Tappe on social media?

On his son’s 3rd birthday on 9th September 2019, he posted his pictures and wrote,

“Simply put: the greatest 3 years of my life. #threeyearsold”

Annaleigh Ashford is an American actress, dancer, and singer who is widely recognized for her work on Broadway as Glinda in ‘Wicked’ and Margot in ‘Legally Blonde’. She is also known for the role of Betty DiMello on the showtime American period drama television series ‘Masters of Sex’. Read more bio…

6 facts you need to know about ‘The Kissing Booth 2’ actor Taylor Zakhar Perez!
Tags : Actor SCOTUS and the City