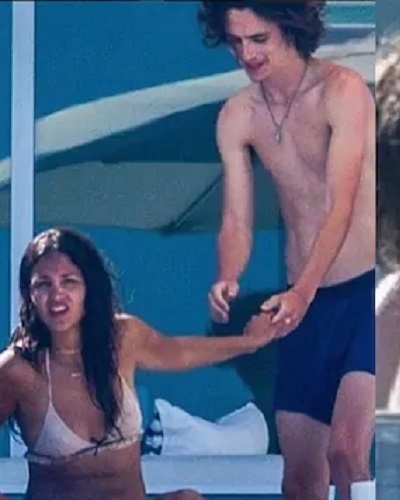 Actor Timothee Chalamet is in a relationship again! After he broke up from his last girlfriend Lily Rose Depp, he has found love again in actress Eiza Gonzalez. The two were spotted packing PDA during their summer vacation in Cabo San Lucas, Mexico. They have been very open about their relationship and enjoying almost the whole week in the infinity pool and also in their rented luxury villa.

Timothee Chalamet and his new girlfriend

Actor Timothee Chalamet is in love again after he separated from his last girlfriend, Lily Rose Depp. The actor and his new girlfriend, actress Eiza Gonzalez have been on a summer vacation in Mexico. They have been photographed kissing each other and enjoying a wonderful time in the infinity pool. The couple is vacationing in Cabo San Lucas, Mexico for almost a week now. The couple have not been secretive of their relationship.

Timothee and Mexican beauty Eiza, 30 were first spotted on Tuedsay 23 June 2020. They were on the poolside with their friends. They swam and also were spotted kissing each other. Timothee also played some guitar in order to serenade Eiza.

And again on Thursday 25 June 2020, the two returned to the same pool. This time again the two were cozying together and looked very much loved-up. The duo were again kissing each other and also took a dip in the pool. But this time around the session was racier.

Coronavirus has been on the rise in Mexico. Therefore, the couple probably were not venturing out much and sticking to this one pool to spend some time together. It is indeed a clever quarantining strategy.

Timothee and his relationships

Timothee whose full name is Timothee Hal Chalamet is 24 now. He is a heartthrob and got a nomination for the Best actor in 2018 Academy Awards for his role in Call Me By Your Name. People and media houses are curious and inquisitive about his relationships but he rarely talks about them in his interviews. When asked where was his first date, he refused to answer the question or reveal anything on it. He said:

“I don’t know. Date is very much a scary word, because then that context has been established,” he said. “You can always see people on early date behavior.”

He was dating Madonna‘s daughter, Lourdes Leon in 2013. The two met LaGuardia High School in New York City. Their romance was short-lived but they continue to be good friends.

The charming actor was also in romance with Lily Rose Depp. They met in June 2018 on the set of the film The King. In October the same year, their kissing pictures in New York made headlines. In December 2018, they were together in Paris. But Timothee did not open up about his relationship with Lily. In September 2019, they were at the premiere of The King. And they looked loved-up in a boat in Capri in Italy. But now, they do not seem to be together and have split.

Also, read Timothée Hal Chalamet- an American actor from Call Me by Your Name and Lady Bird has a immense filmy background!

Will Smith talks of parenting, fatherhood, and divorce from his first wife Sheree Zampino!
Tags : Actor Actress Call Me By Your Name