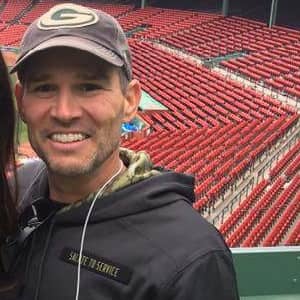 Adam Burks is a married man. He is married to ESPN analyst Jessica Mendoza. The pair met in 2004 and later married in 2006. They have two children together, Caleb and Cayden. Furthermore, Burks’ marriage is going strong as there is no news regarding any extramarital affairs at present.

Who is Adam Burks?

Adam Burks is an American assistant engineer. Additionally, people mostly know him as the husband of ESPN analyst Jessica Mendoza.

Burks was born in the United States. There is no detailed information available relating to his early life and childhood at present. He is of American nationality. Furthermore, details about his ethnic background are not available.

Talking about his education, Burks attended the University High School and graduated in 1987. Additionally, he also graduated from Eastern Washington University.

Burks joined the United States Marine Corps and served in Desert Storm. Later, he began working as an assistant engineer for the Moorpark, California in Ventura County. Currently, people mostly recognize Burks as the husband of ESPN analyst Jessica Mendoza. Additionally, Mendoza is also a former softball player. Furthermore, she is a board member of the National Education Association President of the Women’s Sports Foundation.

Burks has not revealed his current salary. Additionally, there are no details available relating to his estimated net worth at present. But his wife’s net worth is $2 million.

Talking about Adam Burks’s body measurement, there are no details available relating to Burks’ height and weight. His hair color is grey/dark brown and his eye color is brown.