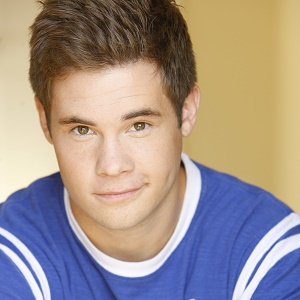 The thing that I think a lot of guys need to know how to do is not take your mother's advice about honesty being the best policy. Listen to your cool, drunk uncle who tells you to lie. Those are the relationships that last

Jealousy is the worst trait in any person

Hot girls have so many options. Sitting at home alone any night of the week and searching the Internet for a dude is on zero hot girls' agendas. So they're definitely not coming after you.

Dashing Adam Devine is currently in a relationship. Previously, he has been in relation to Kelley Jakle from 2012 to 2014. At present, he began dating American actress Chloe Bridges in January 2015, was engaged in their relationship.

They have been together for several years now and their relationship is still going very well. The couple is still together and there is no sign of separation at all.

Who is Adam Devine?

Adam Devine is an American actor, comedian, singer, screenwriter, and producer. He is a star and co-creator of the Comedy Central series Workaholics.

Adam Devine is a hardworking personality and has made a respectable position in the American film industry. He played the role of Bumper Allen in the musical films Pitch Perfect and Pitch Perfect 2.

Devine was born to parents Dennis and Penny Devine on November 7, 1983, in Waterloo, Iowa, U.S.A. His nationality is American and belongs to the mixed (Dutch, Irish, German) ethnicity.

He was raised up by his parents in a friendly and entertaining environment along with his one younger sister named Brittani Devine.

He was encouraged by his father to secure his career in the industry was also highly interested and dedicated. At the age of 11, Devine was hit by a cement truck while walking across the street.

Talking about the educational background of Devine he attended Orange Coast College In 2002 he graduated from Millard South High School in Omaha, Nebraska.

He made a strong base from her debut film and T.V series. Because of her minor role, he didn’t get so much popularity; however, he struggles more and more to get the major role and successful films. He also appeared in several low-rated films and in a minor role in T.V series including 420 Special: Attack of the Show! From Jamaica, the Dude’s House, and Teenage Mutant Ninja Turtles: Don vs. Raph, The Final Girls, etc.

In 2011 he appeared in successful T.V series titled Workaholics and able to earn more positive responses and reviews. He appeared in a total of 66 episodes as co-creator writer and executive producer. He is also nominated for 42nd People’s choice awards.

Adam Devine: Salary and Net Worth

There are no rumors and controversies related to his private life and professional career as well.

Adam has a height of 5 feet 8 inches and weighs 77 kg. His hair color is dark brown and his eye color is hazel. His chest, biceps, and hip size is 42-15-36 inches. His shoe size and dress size are unknown.