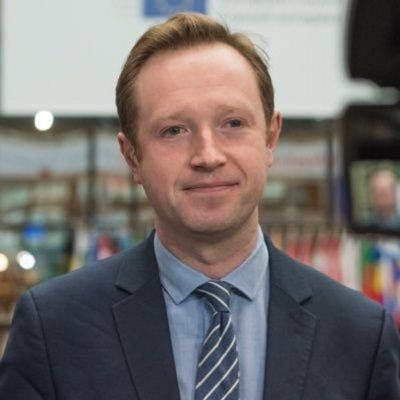 Adam Fleming is currently in a relationship with Pete. Adam tweeted that he went on a holiday with Pete. He shared a picture of Pete doing a BBQ.

Currently, they live in the UK together.

Who is Adam Fleming?

Adam Fleming is a Scottish Journalist and BBC news reporter. Adam is well-known for working in Daily Politics and Newsround.

He has co-presented the podcast and TV program Brexitcast. At present, he works as the BBC’s Brussels Correspondent.

Adam Fleming was born on 2nd April 1980 in Glasgow, Scotland. His family lived in Glasgow at the time of his birth.

He educated from 1989-1998 at the Hutchesons’ Grammer School in Glasgow, Scotland.

Adam attended Hertford College in Oxford and studied geography. He used to edit The Oxford Student newspaper as well. He graduated in 2001 with a first-class degree.

After that, he attended the School of Journalism at City University in London where he was sponsored by BBC.

Adam was spotted by a cameraman on a training course and recommended him to the editor of children’s news program Newsround. As a Journalist, he worked for the Herald newspaper in Glasgow, the Daily Record,  and STV.

Similarly, he worked on CBBC’s news program, Newsround in 2002 and worked as a live reporter for BBC News 24, a Westminster reporter and a BBC Three 60 Seconds presenter.

Adam was hired as the BBC’s Brussels Correspondent and has acted as a regular reporter on Daily Politics and its successor Politics Live.

Likewise, he has focused on EU politics and particularly Brexit by establishing the podcast Brexitcast with his fellow correspondent Chris Mason, Laura Kuenssberg and Katya Adler.

In October 2019, BBC Brussels correspondent Adam walked out of the studio during his report on Brexit. After the incident, he made a Twitter post apologizing about the incident.

He has light brown hair and eyes.