Adam Hills is a Comedian, TV host, writer. Adam is married to an an Australian soprano opera singer, actress and cabaret performer. They have two kids. 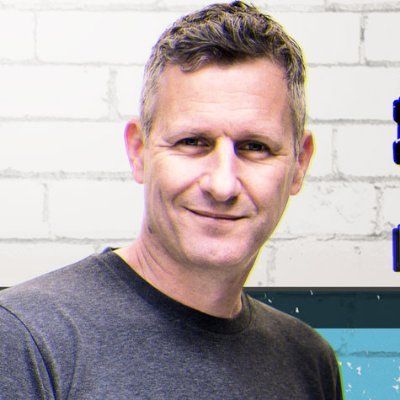 Around the same time my father passed away, I was sitting in the bath with my daughter. She was three at the time, and she was trying to comprehend death, asking me if I was going to die someday. Then she said the most beautiful thing in the world: I don't want to die daddy. I like my new soap. That sums up everyone's reaction to death. No one wants to die. We've all got great stuff in our lives, things we love. We should have as much fun and laughter as possible while we're here

My wife's an opera singer and I'm a stand-up comic, so the thing I need to reinforce is that there's a lot more to life than just being up on the stage

Yeah, I'm missing a foot…" My parents were told early on to treat me like any other kid and to not make concessions. When I fell over, I had to pick myself up.

Adam Hills is a married man. He has exchanged the vows with an opera singer and actress, Ali McGregor. Their marriage took place on 29 Dec 2009.

They are blessed with two daughters, Maisie (b. 2015) and Beatrice (b. 2010). Adam resides with his wife and children in London.

Who is Adam Hills?

Adam Hills is an Australian comedian and TV/Radio presenter. He has hosted a quiz show Spicks and Specks.

In the year 2016, Adam gave his voice for Buddy Pendergast in animated science fiction Thunderbirds Are Go.

Adam Hills was born on 10 July 1970, in Sydney, NSW, Australia. He was born with only one foot and was raised along with his brother Brad Hills. His father who worked for Qantas died due to cancer in Nov 2015.

Adam’s ancestors are originally from English.

His graduation from Macquarie University, Australia in 1991. He studied Bachelor of Arts (Communications).

Adam Hills started performing as a comedian from the age of 19. Adam’s comedy genres are Social Satire and observational comedy. Adam has done several solo shows also. Some of them are:

His other talk show was The Last Leg in 2012. This show was co-hosted by Josh Widdicombe and Alex Brooker.

Adam Hills in 2002 released s single named Working Class Anthem. He has performed this song many times on TV. In the middle of 2003 and 2005, Adam he used to write as a columnist for BBC’s website, Ouch.

This popular comedian’s net worth is around $110 million. A comedian’s average salary ranges between $15k-$605k US yearly.

Similarly, TV presenters’ average salary is around $60k US.

Talking about his body features, he has blue eyes and light brown hair. His height is 6 ft 1 inch.

Adam Hills is active over social media. He joined Twitter in July 2009 and has around 550k followers. His Facebook account was created in Feb 2010 and it has more than 211k followers.