Talking about his love life, Adam Jones is happily living a married life with Korin Faught. Fought is an American artist and painter by profession. The lovebirds tied the knot on 6 July 2013. They started dating in 2010 and finally married after three years.

Moreover, they have two children at present. Previously, he was in a married relationship with Camella Grace. The former couple tied the knot on 18 September 1999. Later, they split up in 2010. 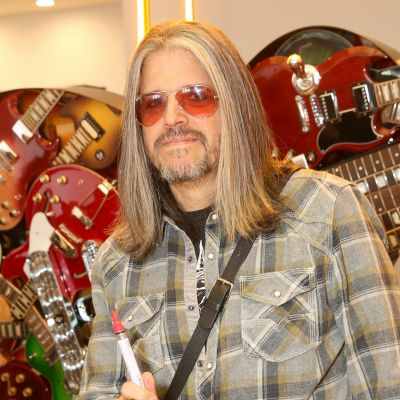 Who is Adam Jones?

Adam Jones is a well-recognized American musician, songwriter, make-up artist, visual artist, and animator. Jones is a four-time Grammy Award-winning musician and has been rated the 75th- greatest of all time by Rolling Stone.

Adam Jones was born on 15 January 1965. At present, his age is 56years old. Likewise, his birthplace is Libertyville, Illinois, the USA.

Not known much about his father and mother’s details, Adam has been secretive towards his family details. Moreover, he has not shared his sibling’s details in the public till now.

Talking about his nationality, Jones holds an American identity whereas his ethnicity is Caucasian.

Regarding education, the musician attended Libertyville High School. He was invited into the Suzuki program and continued to play the violin through his freshman year in high school. Later, Jones played bass guitar in the band Electric Sheep. He also studied straight makeup at the Studio Makeup Academy in Hollywood.

Professionally, Adam started his career in animation and worked as a sculptor and special effects designer. He used his skills to direct music videos such as Sober, Prison Sex, Vicarious, and so on. Later, the star gained interest in acting and the film industry.

Talking about his music journey, Adam toured with Jello Biafra/The Melvins band and helped to their albums, Never Breathe What You Can’t See and Sieg Howdy!. He also performed the national anthem of the USA at the WWE’s SummerSlam in 2011.

Meanwhile, Jones has earned the Grammy Award for Best Recording Package as art director for his work on 10,000 Days. He draws his own comics, and the artistic ability he gained as a young child. The musician has also formed the cover and inside liner art for many of Tool’s albums and also the re-release of Peach’s Giving Birth to a Stone, on which Jones’s fellow Tool Member Justin Chancellor played bass.

A famed personality, Jones has earned a handsome amount of money from his multiple profession. He has been active in his profession from the year 1987 till the present.

It is reported that Adam Jones has an estimated net worth of $50 million as of 2022. He lives a lavish lifestyle along with his family. He has featured on commercials for salad dressing, Olympic Paints &Stains, and Duracell.

However, the popular musician has not disclosed his exact salary, earnings, and assets details till now.

Adam has never been part of any controversial matter or rumors till now. The star has been preoccupied with his professional and private life.

It seems that Jones prefers enjoying his personal life and does not want to merge it with his professional life.

56 years old musician, Adam has handsome looks and an admirable personality. He stands at a height of 6feet 1inch. Also, he has a balanced bodyweight of 77 kg.

Furthermore, Jones has hazel eyes whereas his hair is salt0-and-pepper.

Nevertheless, the famous star has never mentioned other physical details in the public yet.

Regarding his social media presence, Adam Jones is an active personality on social media. Adam has more than 322k followers on his official Instagram account @adamjones_tv.

He is also active on Twitter with around 66.7k followers.

However, Jones is not available on Facebook at the moment.

BIP’s Tayshia Adams has confirmed that she split up with her boyfriend John Paul Jones!