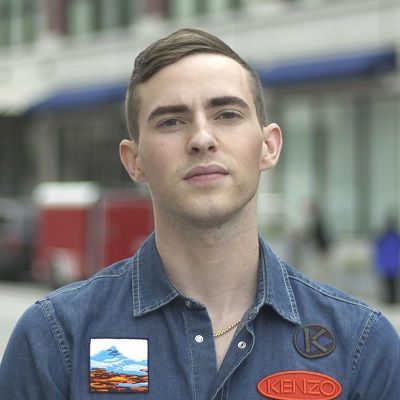 Being gay is not something that defines me. What defines me is what my mom always taught me: to treat everyone with respect, to always be a hard worker, and to be kind

Haters are fans in denial

I can't tone it down. I'm being me and being myself

I can see my competitors sweating, and I am cool as a cucumber

When you're not hiding anything, it's just very easy to be yourself - shockingly.

Adam Rippon is in an open relationship with Finnish-born realtor Jussi-Pekka Kajaala. The two met on Tinder while at a skating competition in Finland in 2018.

It has been over a year since they started dating each other.

The pair live together and are very happy with each other. They often post photos together on Instagram.

Who is Adam Rippon?

Adam Rippon was the first openly gay American man to qualify for the Winter Olympics followed by his selection in the U.S. team for the 2018 Winter Olympics.

Rippon was born on November 11, 1989, in Scranton, Pennsylvania. Currently, the retired skater is 30 years old. He is the son of Rick Rippon and Kelly Rippon.

His mom is a motivational speaker for Authentic Change Additionally, his father is the president at Netrastar, a company that provides free daily online training to different businesses. He has five younger siblings.

He is of American nationality. However, his ethnicity remains unknown.

There is no information about Adam’s educational background.

Adam Rippon’s career had an outstanding start after he won the title of the 2007 junior Grand Prix Final. Moreover, he became the first man to win back-to-back world junior titles. He also competed for a spot in the U.S. team for the 2010 Olympics. However, he ended up as an alternate.

In 2012, he was able to win a silver medal in the nationals. However, in 2012, he suffered one huge setback with an eighth-place finish at the 2014 nationals which ended his hopes of competing in the Sochi Games. He even considered quitting. Fortunately, he did not.

In the 2015 nationals, he bounced back and earned a second-place finish at the 2015 nationals before eventually winning his first American title in 2016. In 2017, he could not compete with a fractured foot. However, after a year, he returned to earn second place in both Grand Prix events.

At the 2018 nationals, he finished fourth. However, he received credit for his overall bodywork for the season. Following that, he was selected in the U.S. men’s team and finally earned his long-awaited Olympic dream.

He delivered a flawless performance in Coldplay’s “O” and the Cinematic Orchestra’s ‘Arrival of the Birds’. He was able to bag a bronze medal for his country. Furthermore, he won the heart of the audiences with his clean performances in the short and long programs of the individual men’s skate.

He finished 10th place and emerged as one of the fan favorites of the Olympics and gained popularity. He announced his retirement in November 2018.

Adam has won several titles. His first was the title of the 2007 junior Grand Prix Final. Following that, in 2012, he won a silver medal in the nationals. Moreover, he won the nationals in 2016.

In 2018, he won two silver medals on the Grand Prix. Furthermore, he won a bronze medal in the 2018 Winter Olympics.

The famous skater has an estimated net worth of around $4 million. However, his annual salary is under review. His main source of income is skating.

Adam was involved in a clash with Mike Pence. When asked by USA Today to comment on the selection of the U.S. Vice President as head of the 2018 U.S. Olympic delegation, he said, “You mean Mike Pence, the same Mike Pence that funded gay conversion therapy? I’m not buying it.”

Furthermore, he said he wouldn’t join the rest of the American national team for the traditional visit to the White House to meet President Donald Trump at the end of the Games.

Adam Rippon has a height of around 5 feet 7 inches. Moreover, he weighs around 65 kg. In addition, he has brown hair and green eyes.

You may also like to read Tanith Belbin White, Pierre-Luc Dubois, and Brett Hull.