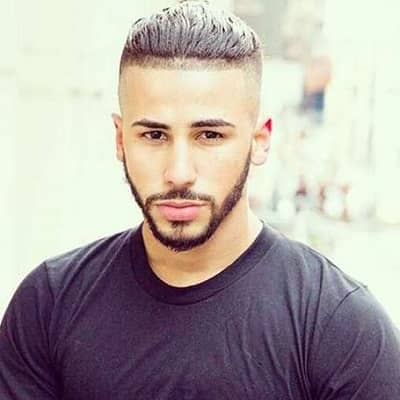 Adam seems to be single and is not dating anyone currently.

The Youtuber once told his audience that he wants to be single and isn’t interested in a relationship as of now. Behind that, he jokingly also tells that he wants 13 children and a large family.

In a video posted in March 2016, he revealed that he has his son, Mohsin Saleh. Previously he has introduced him as his nephew.

He also talked about his relationship with Mohsin’s mom in the video. As he said they weren’t married and surely she isn’t his wife. Although they shared a good friendship now also.

And on 30 March 2016, he finally posted a video revealing Mohsin’s mother. Although she denies revealing herself. And so her face was blurred in the video. Adam apologizes to his fans and has also promised them that he will be showing her when she is ready to come out in public.

Who is Adam Saleh?

Adam Saleh is an American YouTube personality of Yemeni origin from New York City. He has also established his career in the music industry releasing his vocals and albums.

The Youtuber earned a great fanbase in a short span especially the Muslim fans as most of his videos are experiments on the Islamic and Arabian cultures.

Adam was born on June 4, 1993, in Brooklyn, New York, U.S. His full name is Adam Mohsin Yehya Saleh. He is of Yemini ethical group.

Adam is one of the nine children. He was born to Yemeni parents but their names aren’t disclosed as of now. Adam’s three eldest brothers died as the child. He has three elder sisters and an elder brother and a younger brother(Mase) now.

His brother, Abe Kickz is also a Social media star. Just a few days before his cousin’s wedding, his uncle died from a car accident.

Adam was expelled for hitting his dean’s computer. He revealed that he did so as did it as his dean was being racist towards his mother.

Adam was active on Youtube since 2012. He posts various skits, comedy shorts, and social experiments. He created his channel Adam Saleh on Jan 1, 2012. Previously the channel was named called “TrueStoryASA” and was created along with high school friends. At first, the YouTuber posts various simple videos created in his room or home. Later he received global fame.

Adam then launched another YouTube channel entitled Adam Saleh Vlogs on Jul 29, 2012. His first video “Disturbing The Peace! ” was posted on Jul 31, 2012, and has over 276K views now. ANd his most-watched video is, “PULLING HIJAB OFF EXPERIMENT!” with 24M views.

Adam has collaborated with Sheikh Akbar, Karim Metwaly, and Slim Albaher and launched the channel, 3MH. They split up in May 2015 Adam took over the channel afterwards.

Adam was an amateur boxer with a 13-0 record previously. Nonetheless, his fighting license gets invalid after the street fight video gone viral on Worldstar. Although he later received nationwide popularity after appearing on Ellen’s show for his dancing antics.

Appearing on the show was his career turning point for being a full-time Youtuber. Recently on 18 February 2018, Adam accepted and even won the challenge to be KSI’s next boxing opponent.

Adam has also built his career in the music industry. He has recorded various successful singles. His one singles Tears is the most downloaded single on release. The star released his album Chapter II in Sep 2017. It featured various his songs and also the collaboration with other artists.

Adam has also featured in the documentary Free Trip to Egypt in 2019 and in the movie American Sharia. Moreover, he is also the founder of Winfinity Ent.

With an engagement rate of around 8.88% and analyzing his subscriber’s growth, we can say that he must earn good money from his internet career.

Likewise, he earns from his merchandise on his website. The YouTuber even earns from the promotion and brand endorsement.

Adam has been part of various controversies.

The YouTuber claimed that he flew inside a suitcase in the baggage hold on a Tigerair flight from Melbourne to Sydney in one of his Youtube videos. However, Melbourne Airport proved it wrong by providing their security footage. The video showed that he was boarding the plane with the airline.

Following that in 2018 Adam along with many other YouTubers were involved in a BBC Trending investigation. Furthermore, the Youtuber has also been in various trouble from his staged videos.

He stands at a height of 5 feet and 7 inches and has a body mass of around 65 kg. Talking about his appearances, he has black-colored hair and eyes.

Likely, his YouTube channels Adam Saleh Vlogs and Adam Saleh have respectively 4.8M and 2.53M subscribers as of now. Similarly, he has over 1M fans with 14M likes in his TikTok account.

You may also read the bio of Kate Elizabeth, Young Pharaoh, YourPalRoss, and JR Stuber.