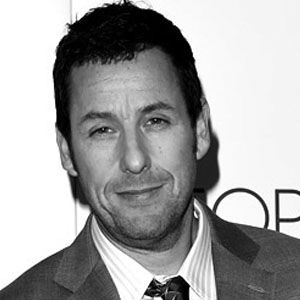 Doing Saturday Night Live definitely affects my relationship with my girlfriend and with my family, because you feel so much pressure to do well that night. But I think everyone's grown to accept that and so they give me my space at the show

Who is Adam Sandler?

Adam Sandler is an American Actor and Comedian. He is also a film producer, musician, and screenwriter.

He first rose to national fame as a cast member on Saturday Night Live before making the jump to Hollywood.

He is best known for his comedy roles. Sandler has released five comedy albums in his career. In 1999, he founded Happy Madison Productions.

Adam Sandler was born in the year 1966 on September 9. He was born as Adam Richard Sandler in Brooklyn, New York, U.S. He is also known by his nickname Sandman. As of September 2021, he is 55 years old.

He was born to his father Stanley Sandler and his mother Judy Sandler. He has got two sisters Elizabeth Sandler and Valerie Sandler. Also, he has a brother named, Scott Sandler.

His father Stanley is an electrical engineer while his mother is a nursery school teacher.

As regards his childhood, he grew up in Manchester, New Hampshire after moving there at the age of six. Furthermore, he hasn’t disclosed many details regarding his childhood life.

Adam attended Manchester Central High School. As a teen, Sandler was in BBYO, a popular Jewish youth group. Sandler graduated from New York University’s Tisch School of the Arts in 1988.

Early in his career, Sandler played Theo Huxtable’s friend, Smitty in The Cosby Show, and the stud boy or trivia delinquent on the MTV game show Remote control.

After his film debut Going Overboard in 1989, he performed in comedy clubs, having first taken the stage at his brother’s urging when he was 17.

He was hired as a writer for SNL in 1990 and became a featured player for the following year, making a name for himself by performing amusing original songs on the show.

In 1993, he appeared in the film Coneheads. In 1994, he co-starred in Airheads with Brendan Fraser and Steve Buscemi. He starred with Kevin James in the film I Now Pronounce You Chuck and Larry in 2007.

In 2009, he starred in Judd Apatow’s third directorial feature Funny People. The film was released on July 31, 2009.

Adam Sandler has a net worth of $420 million. He earns an annual salary of $20 million.

Adam Sandler became part of rumors when the news about his death was viral on social media. Actually, the news was a death hoax. The news went viral all over social media Twitter.

There was a buzz that the comedy actor had met an early demise which results in many tributes and messages of condolences.

Adam Sandler has a perfect height of 5 ft 9 inches. He has a weight of 165 lbs (74.84 kg). His hair is black in color. His eye is brown in color. Besides these, there is no information on his dress size and shoe size.