Adam Silver is a married man. He is married to Maggie Grise.

The pair were first introduced by a mutual friend. They later married in May 2015. The couple welcomed their first child, Louise Burns Silver in 2017. 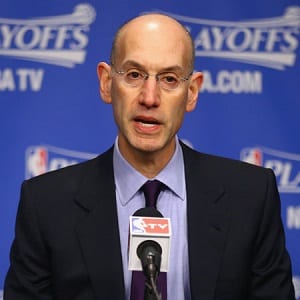 Who is Adam Silver?

Adam Silver is an American lawyer and businessman. People mostly know him as the commissioner of the National Basketball Association (NBA).

Previously, he served as NBA Deputy Commissioner and Chief Operating Officer for eight years in NBA.

Silver was born in Rye, New York on April 25, 1962. He was born to parents Edward and Melba Silver into a Jewish-American family.

Throughout his childhood years, he grew up in the suburb of Rye in Westchester County.  Additionally, he was the fan of New York Knicks growing up. Adam is of American nationality.

Furthermore, there is no information available about his ethnic background at present. Adam has two brothers: Owen, Erik and two sisters, Emily and Ann.

Talking about his education, Silver attended Rye High School. In addition, he later graduated from Duke University in 1984.

Eventually, he received a J.D. degree from the University of Chicago in 1988.

Silver initially served as a litigation associate at the law firm Cravath, Swaine & Moore. Additionally, he also worked as a law clerk to Judge Kimba Wood.

Furthermore, Silver also serves on Duke University’s Board of Trustees. Additionally, he also serves on the board of the Lustgarten Pancreatic Cancer Foundation. Adam has worked as an executive producer of the IMAX movie ‘Michael Jordan to the Max.’

Silver received the 2016 Distinguished Alumnus Award from the University of Chicago Law School. In addition, he was ranked Silver No. 1 on its list of the 50 Most Influential People in 2016 in Sports Business.

Silver has not revealed his current salary. However, he has an estimated net worth of around $30 million as of 2022.

Silver became part of a controversy after he witnessed a moment where Donald Sterling was cited for making racist remarks.

Furthermore, at present, there are no rumors concerning Adam’s life and career.

Talking about his body measurement, Silver has a height of 1.9 m.

Additionally, his hair color and eye color is dark brown.