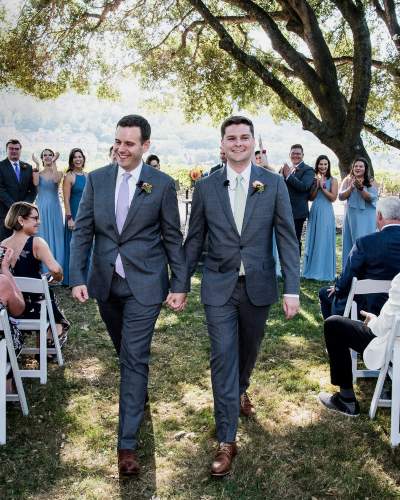 Adam Wise is a Federal Government Consultant. Wise is said to be a graduate of Colorado State University. He is the husband of American columnist Guy Benson.

How did Adam Wise and Guy Benson meet?

Adam Wise and Guy Benson met each other in 2015 after Guy came out as gay on live television while promoting his book End of Discussion on the show The Guy Benson Show. It was the most-terrifying television appearance for Guy. But it turned out to be life-changing for him as Adam reached out to him via mail after watching the show.

After that, they met in person and bonded over the Netflix show Making A Murderer. They have been flooded with homophobic attacks and hate but managed to stay positive and make their relationship successful.

Adam Wise and Guy Benson married on 7th September 2019 in a romantic ceremony held at the Charles Krug Winery in Napa Valley, California. They made their four years relationship successful by walking down the aisle in front of 150 guests wearing matching gray J. Crew suits.

They served the guests a three-course meal that included a tomato, feta, and bacon salad, bavette steak with a potato puree, and a sweet and savory cheese course. For dessert, they offered a variety of cakes. Guy revealed,

“What’s especially wonderful about this celebration is that in an age of so much division and partisan anger, our friends and family from across the ideological spectrum have joined us to celebrate our love. People talk a lot about inclusion, open-mindedness and tolerance; our wedding guests are living those values.”

Guy Benson is a political analyst and commentator from America. He is a regular contributor to Fox News. Furthermore, he is also a political editor of Townhall.com and a moderate talk radio personality. Read more bio…