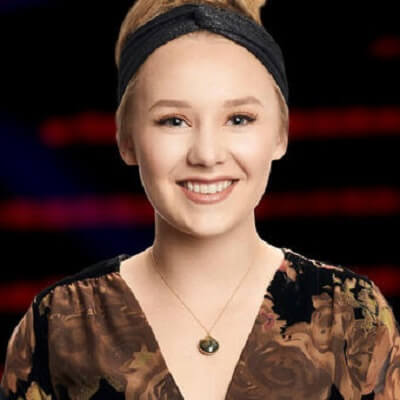 Addison Agen is currently in a relationship. She is dating Mike Gronsky. He is also a guitarist and songwriter.

The couple started dating in April 2020. They have now been together for over a year and Addison expressed her love through a post on Instagram wishing her better half a Happy Anniversary. The couple seem to be very close to each other and regularly post pictures together on their social media accounts.

Who is Addison Agen?

Addison Agen is an American singer-songwriter and guitarist. She is best known for her participation in the thirteenth season of ‘The Voice’ in which she finished as a runner up at the age of 16.

Addison Agen was born on March 31, 2001, in Fort Wayne, Indiana, the United States of America. As of 2020, her age is 19. She was born to parents Morrison Agen (father) and Kristine Agen (mother). She is one of her parents’ two children and has a younger brother named Korrigan Agen.

Agen spent her childhood days in Fort Wayne, Indiana. She started singing at the age of four. When she was just nine years old, her father bought her a record store that gave her the opportunity to explore different genres and musical influences. She started songwriting when she was 11 years old. Her mother has done several jobs to support her family including being a musical therapist at nursing homes. Addison loves helping her mother by singing at nursing homes.

Talking about her educational background, she is still a student. She attended  Concordia Lutheran High School.

When she was just 15 years old, she released her 10-track debut album called ‘New Places’. The album includes songs like ‘Start Over’, ‘Both of Us’, ‘Look’, ‘Torn’, ‘Sugarcoat’, etc.

Addison Agen competed in the thirteenth season of The Voice as a member of Team Adam. She got eliminated in the Battle Rounds after losing to Karli Webster.

After her loss, she continued to work hard and garner a fanbase, yet she was overlooked as a finalist. Adam Levine advocated for her by sending her into the Top 12 live shows. She became successful and won the love of America receiving the first iTunes multiplier in the season and earned five more in her journey, and stayed on the iTunes Top 200 weeks. She emerged at the top of the competition week in week out and propelled herself into the finale.

In the finale, she performed very well and all of her songs reached the iTunes Top 10. However, it was not enough to win the competition as she came second to Chloe Kohanski.

On December 20, 2017, she released a collection of all her performances on The Voice which included her thirteen performances.

Agen stands at a height of 5 feet 7 inches and weighs around 55 kg. Her hair color is blonde and her eyes are dark brown in color.

Addison Agen has an estimated net worth in the region of $400k. There is no information about her salary. Her main source of income is singing. On average, a singer in America earns around $35k per year.

Agen has not been involved in any controversies. She has been able to keep herself away from any type of controversy and scandal. So far, she has not done anything controversial in her career. Similarly, there are no rumors about her of any kind.

You may also like to read the Bio, Career, Body Measurements, Net Worth, Social Media, Relationships, and more about Todd Tilghman, Amanda Brown, Adam Levine, etc.