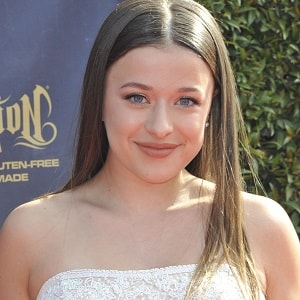 Addison Holley is in an affair with Nick Skippon. They have not revealed their future plans. They are happy with their relationship.

Who is Addison Holley?

Addison Holley is a Canadian actress and she is famous for her voice role of Amaya/Olette in ‘PJ Masks’. She was nominated for the Daytime Emmy Award for Outstanding Performer in a Children’s Series in 2016 for ‘Annedroids’.

She was born on May 18, 2000, in Burlington, Ontario Canada. Addison is currently 18 years old. She has got a younger sister, Kallan Holley(voice actress). Her birth sign is Taurus. She ha got a nickname, Addy.

She has been graduated but her university name is unknown.

She has starred as Anne in ‘Anndroids’, Miss Elaina in ‘Daniel Tiger’s Neighborhood’,  Ella in ‘Ella the Elephant’, Lili in ‘My Big Big Friend’, Amaya in ‘PJ Masks’, Young Rosie in ‘Rosie Takes the Train’, Bianca in ‘Wishenpoof!’, and as Robot in ‘Fixer-Upper’.

Her supporting roles include: Dana McNab in ‘Baxter’, Layla in ‘Caillou’, Katie in ‘Cyborg Soldier’, Alice in ‘Doodlebops Rockin’ Road Show’, Kate in ‘Grojband’, Sally monster in ‘Monster Math Squad’, Anastasia in ‘My Babysitter’s a Vampire’, Jenny Donkers in ‘Really Me’, Frankie Palermo in ‘The Red Maple Leaf’, Day Queen in ‘True and the Rainbow Kingdom’, Katie in ‘Wild Kratts’, and many more.

She won Action of Film Award for Outstanding Cast Performance-Feature in ‘The Red Maple Leaf’ in 2016, Joey Award for Voice Over Ensemble in ‘Little Charmers’ in 2016, Young Artist Award for Outstanding Young Ensemble in a TV Series in ‘Annedroids’ in 2015, Young Artist Award for Best Performance in a TV Series-Recurring Young Actress in ‘My Babysitter’s a Vampire’ in 2013 and nominated in his career several times.

She has an estimated net worth of around $850,000 and she gets an average salary of around $20k US dollar per episode.

She is very secretive in nature. She has not been involved in any rumor and controversies in her personal and professional career.