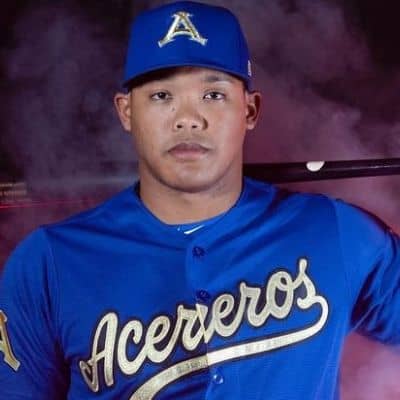 Reflecting on his personal life, currently, Addison Russell is in a living relationship with his girlfriend, Asti Kelley since 2018. Together, they share a son named, Raynor Addison Russell, who was born on October 22, 2018.

The past relationship details

Addison has had interesting hook-up history. He has a baby mother, Mallory Engstrom who was his former girlfriend. They are parents to one daughter named, Mila Jade Engstrom-Russell.

Russell is a divorced man. Previously in January 2016, he was married to Melisa Reidy in Milton, FL at Sowell Farms. During their togetherness, they became parents to three children.

They share one son together, who was born in August 2015.

Who is Addison Russell?

Addison Russell is an American professional baseball player who plays for the Acererors de Monclova of the Mexican League.

In the 2012 Major league Baseball draft, the Oakland Athletics drafted him 11th pick. In 2014 he was traded to the Chicago Clubs and was listed as the third-best prospect in baseball.

The American professional baseball shortstop was born on January 23, 1994, in Pensacola, Florida. As of 2022, he is 28 years old holding an American nationality.

Who are the parents of Addison Russell?

He was born to his mother, Milany Ocampo-Russell while the name of his biological father is not known. His mother is of Filipino descent.

Later, his mother got married to his stepfather, Wayne Russell. At the age of 13, he was adopted by Wayne and he got the full name, Addison Wayne Russell.

While he was three months old, he caught the human respiratory syncytial virus.

As per his academics, he went to Pace High School based in Florida.

In 2010, he participated in the Under Armour All-America Baseball Game. He scored 368 batting and a.532 on-base percentage, during his final high school baseball season.

At the 2011 COPABE 18U/AAA Pan American games, he earned a gold medal being a member of the USA Baseball 18U National Team.

In the 2012 Major League Baseball draft, Oakland Athletics was drafted with the 11th overall pick of the first round. He got a signing bonus, $2.625 million from A’s instead of playing from Auburn.

According to Baseball America, he was the Athletic’s best prospect. In 2013, he was given various titles including,  a CAL post-season All-Star, a CAL Futures Game selection, an Oakland MILB.com Organization All-Star, and a California League (CAL) rookie of the year.

Later, In exchange for pitcher Jason Hammel and pitcher Jeff Samardzija, he was traded to the Chicago Clubs. At the end of the 2014 minor league season, he was sent to the Arizona Fall League for the second time.

He played over the Pittsburgh Pirates at PNC Park to play second base.

Russell made his first career walk-off home run, over the Milwaukee Brewers on April 19, 2017. Due to his right foot injury, he was kept on the 10-day disabled list, on August 4, 2017.

Due to abuse allegations made by his wife, he got suspended for the 29 games of the season. On December 2, 2019, he was freed and began to play like a free agent.

Following that, he signed the contract with the Kiwoom Heroes of the KBO League on June 19, 2020. Later, on November 27, the Heroes made an announcement that they would not join Russell back for the 2021 season.

Currently, he plays for the Acererps de Monclova of the Mexican league after signing on April 1, 2021.

How Much is Addison Russell’s Net worth and Salary?

As of 2022, the estimated Addison Russell‘s Net worth is approximately $1.5 Million. However, his salary and incomes are under review.

Is Russell Involved In Any Rumors Or Controversy?

Russell seems like he is a genuine guy doing his best work without harming others. At present, he also does not have any rumors regarding his professional and personal life.

Talking about his body features, Russell stands at a good height and weight. However, there is no precise info available about his body measurements.

Adding more, he has a brown complexion, along with a set of chinky black eyes and hair of the same color too.

The athlete is also active on social media platforms. Likewise, Addison owns an Instagram account under the username, @addison_russell and has around 274K followers.

Along with that, there is also a fan-based Facebook page under his name, that has garnered about 43K followers.