Addison Timlin is an American actress. She is married to her co-star Jeremy Allen White. The couple is the parents of two kids. 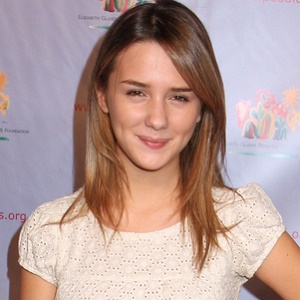 I prefer working, period. I think that I like doing film more just because when you get a script, you have the story from start to finish, so you can really find the character's arc, and when you walk away from it, you know you're sort of powerless to what happens.

I love all Helmut Lang. I love Alexander Wang and Alice+Olivia.

I just want to do something challenging.

Reflecting on the personal life of Addison Timlin, she is married to an American actor, Jeremy Allen White on 18 Oct 2019. She is currently in a happy relationship.

The couple announced their engagement on April 14, 2019. The pair met the first time on the set of the popular show ‘Shameless’. He expressed his feelings towards her during they were working on the set and began dating in October 2011.

This couple in Oct 2018 was blessed with their first child, a daughter, Ezer Billie White. They welcomed their second daughter, Dolores Wild White on 12th December 2020.

Previously, Addison Timlin was in a relationship with Connor Paolo in 2005 which soon ended in 2006.

Then she also dated Justin Chatwin in 2010.

She was also in a long-term affair with American film producer Zach Shields in 2012 but their relationship couldn’t last for long.

Who is Addison Timlin?

Bold and beautiful Addison Timlin is an American actress who began her acting career in 2005. She is best known for her appearance in films and television shows like Californication, Zero Hour, Stands Up Guys, and That Awkward Moment.

The daughter of Jayne and R.J. Timlin, Addison Timlin was born in Philadelphia, Pennsylvania. She was born on 29 June 1991 and named Addison Jayne Timlin.

Her father’s name is R.J. Timlin and mother’s name is Jayne Timlin. She has a brother and two older sisters. She is of Irish ethnicity and has an American nationality.

Addison Timlin studies with Ann Ratray in NYC. At the age 8, she played the character of an orphan in a 2000-01 national tour of Annie, and eventually starred in the title role in several productions.

Talking about the career journey of Addison Timlin, she is active in the entertainment field since 2005 and she is still active in it. She debuted from the movie Derailed in 2005 portraying the character of Amy Schine as the daughter of Clive Owen and Melissa George’s characters.

Before debuting in the film, she has already made her Broadway debut in 2003 as Baby Louise in the Tony Award-nominated revival of Gypsy, starring Bernadette Peters and directed by Sam Mendes. In 2006, she appeared in the short film The Isabel Fish portraying the character of Maddy.

In the same year, she debuted in the television show 3 lbs portraying the character of  Charlotte Hanson. She has spread her wing equally at ease in both media. In 2010, she has also appeared in the music video Check Yes Juliet of We The Kings. In 2013, she appeared as the main cast in television series Zero Hour portraying the character of Rachel Lewis.

Addison Timlin has appeared in m numerous movies and television shows including Californication, Girl in the box, Long Nights Short Mornings, That Awkward Moment, Love and Air Sex, and much more. In 2016, she was cast as a female lead in CBS’ pilot for MacGyver but she was dropped from the cast when the network picked up the pilot to series.

Her success in career path has paid her well financially making her net worth estimated to be $400 thousand.

She has not been dragged into any kind of significant rumors or controversies to date.

With her perfect body, Addison Timlin is a heartthrob for many youngsters. She stands 1.55 m tall and weighs 58 kg. Her body figure is 37-26-36 and her bra size is 34 C. She has a dark brown eye color and has light brown hair. Her shoe size is US 5 and her dress size is 8.