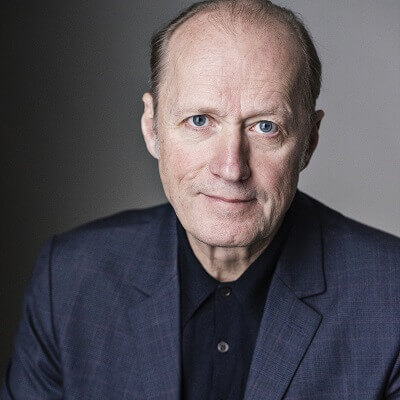 Ade Edmondson is a married man. He is married to Jennifer Saunders. His wife, Jennifer is an English comedian and actress. Her accolades include three BAFTAs, British Comedy Award, People’s Choice Award, etc.

The couple exchanged wedding vows on 11 May 1985. They have now been happily married for around 35 years. From their marriage, they have three daughters, Ella, Beattie, and Freya. Ella is a musician, Beattie is an actress, and Freya is a designer.

Who is Ade Edmondson?

Ade Edmondson is an English comedian, actor, and TV presenter. He is best known for his work in The Young Ones, Bottom, Jonathan Creek, Holby City, Miss Austen Regrets, etc. He won the title of Celebrity Masterchef in 2013.

Ade Edmondson was born Adrian Charles Edmondson on January 24, 1957, in Bradford, West Riding of Yorkshire. As of 2020, his age is 63. He was born to parents Fred Edmondson (father) and Dorothy Eileen Sturgeon (mother). His father died in 2014. He has three siblings. He has one sister, Hillary Edmondson, and two brothers, Matthew, and Alastair.

His family had to move to different places as his father was a teacher in the armed forces. He lived in Cyprus, Bahrain, and Uganda. His ethnicity is English.

Talking about his education, he went to Pocklington School, East Riding of Yorkshire. He graduated from there in 1975.

Following his graduation from Pocklington, he went to the University of Manchester. He graduated with a 2:1 degree in drama.

While studying at Manchester University, he met his future comedy partner Rik Mayall. Together, the two friends went on to work on several projects including the sitcom ‘The Young Ones’ and the 1991 series, ‘Bottom’. In the early 80s, they formed the Comic Strip Club including the actress, Jennifer Saunders.

His small-screen appearances include Blackadder Goes Forth, Jonathan Creek, Teenage Kicks, etc. Moreover, he also featured in Holby City and Miss Austen Regrets. Furthermore, he co-wrote and starred in Guest House Paradiso and made an appearance in The Pope Must Die. His most notable role in a TV drama came in 2016 as Count Rostov in the series War & Peace.

In 2013, Edmondson won the title of Celebrity MasterChef. A year later, he presented Ade at Sea. The same year, he portrayed DCI Warner in the mini-series, ‘Prey’.

In 2017, he appeared in Star Wars: The Last Jedi as Captain Peavey. In 2018, he appeared in the episode, ‘Sigh No More’ as Sergeant Dogberry in Ben Elton’s Upstart Crow. The same year, he toured with Nigel Planer in a play called Vulcan 7. From 2019 to 2020, he portrayed Daniel Cook in EastEnders. In 2020, he portrayed Charles Crabtree in the TV series, Death in Paradise.

How much is Ade Edmondson worth?

Ade Edmondson has an estimated net worth of around $16 million. He has earned a good amount of money from his career as an actor, TV presenter, and comedian. He owns a five-acre, £1 million property in Devo.

Edmondson stands at a height of around 5 feet 10 inches. He weighs around 75 kg. His hair color is blonde and his eyes are blue in color.

The actor/comedian has not been involved in any controversies. He has been able to keep himself away from any type of controversy and scandal. So far, he has not done anything controversial in his career. Similarly, there are no rumors about him of any kind.

You may also like to read the Bio, Career, Body Measurements, Net Worth, Social Media, Relationships, and more about Jennifer Saunders, Jack Davenport, Jayne Brook, and more.