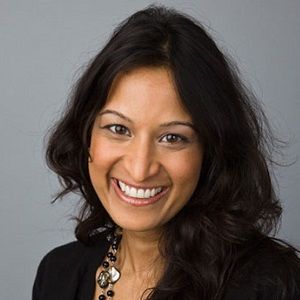 Aditi is a married woman. She tied the knot with her longtime boyfriend, Matt Wirginis in May 2013. Prior to marriage, the couple was in a relationship for a couple of years and got engaged in 2012. Matt is a Sales Engineer at Measurement Instruments.

As a loving couple, they have also welcomed a baby boy named Nico. Since their marriage, they have been enjoying their married life beautifully. Apart from that, there is not even a single rumor of extramarital affair and dispute of her. Currently, Aditi and Matt are living elegantly.

Who is Aditi Kinkhabwala?

Aditi Kinkhabwala is an American sports anchor and reporter. Currently, she serves as a reporter for NFL Network. Prior to a reporter, she has also served as a writer at the Wall Street Journal.

Aditi was born in New York, United States. Her exact birthdate is unknown. Aditi is an American by nationality and holds mixed ethnicity of Indian and American. She grew up in New Jersey along with her parents.

As regards to her family,  she hasn’t revealed any information about her father, mother, and siblings. Also, she has not disclosed any details about her family background.

Aditi Kinkhabwala has completed her graduation in  American Studies from Cornell University.

Aditi Kinkhabwala began her reporting career as a sports reporter for the Bergen Record in New Jersey in 2002. Initially, she covered Rutgers football and men’s and women’s basketball. Furthermore, she also wrote for Yankees and Mets.

Later, she began to serve as a writer for the Wall Street Journal where she covered the New York Giants including Super Bowl XLVI. During that time, Aditi wrote for two New Jersey dailies, The News Tribune and then the Home News Tribune.

Currently, she is working at the NFL Media Group as a reporter. Moreover, she is also a national correspondent for the NFL Network. Additionally, she hosts the live program such as Around the NFL, NFL Total Access, GameDay First, GameDay Live and GameDay Highlights.

Being a sports reporter for the renowned NFL network, it seems that Aditi earns a good amount of money from her profession. She has a net worth of $1 million but her salary is not revealed yet.

Once, Aditi was also stuck in a controversy of RB Mixon. Her name also came in the controversy as she Tweet, “Oklahoma’s Joe Mixon not lacking for suitors. Lions, Saints, Bengals and Browns all met w/ him privately tonight before tomorrow’s Pro Day.” Furthermore, there are not any drastic rumors regarding her personal and professional life.

There is not any information regarding her height and weight. Moreover, she has black eyes and black hair. Her other body measurements are unknown.