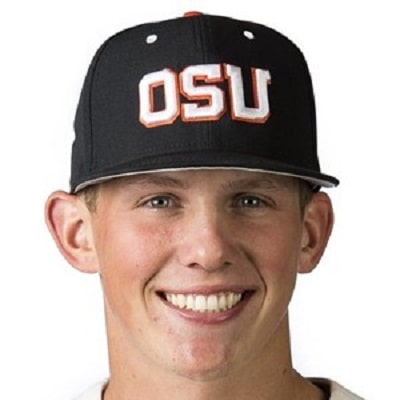 Adley Rutschman is currently in a relation. But, he has not shared the name and details of his girlfriend but features her in his social media page. Hope, he will soon reveal the identity of the mysterious girl.

Who is Adley Rutschman?

Adley Rutschman is an American baseball player who has played for Oregon State Beavers as a college baseball catcher. He was selected by Baltimore Orioles with the first overall selection in the 2019 MLB Draft.

He was born on February 6, 1998, in Portland, Oregon, USA. His birth name is Adley Stan Rutschman. He was born to mother Carol Rutschman and father Randy Rutschman. He has a sibling, a younger sister named Josie Rutschman.

Adley holds American citizenship but his ethnicity is unknown.

He joined Sherwood High School and then enrolled at Oregon State University.

Moreover, he was selected with the first overall selection in the 2019 MLB draft by the Baltimore Orioles. Other who got selected in 2019 Major League Baseball (MLB) Draft includes Bobby Witt Jr., Andrew Vaughn, JJ Bleday.

He must have earned a huge sum of money from his career however, he has not revealed his exact net worth, salary, and income. He received a major-league-record $8.1 million signing bonus with the Baltimore Orioles which is the highest signing bonus ever.

There was a rumor that whether he will be selected in MLB Draft 2019 or not but the rumor ended after he was selected.

Adley Rutschman has a height of 6 ft. 2 inches and weighs 98 kg. He has blue eyes and blonde hair. His shoe size, dress size, etc. are not available.