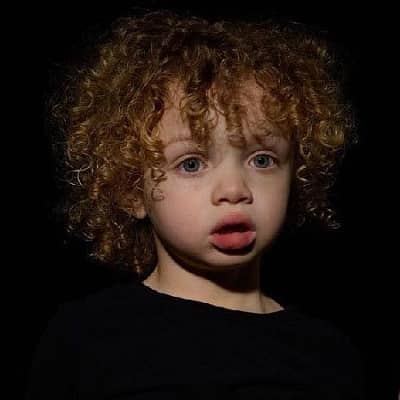 Adonis Graham is too young to be in any relationship. He is just 3 years old and has a long way to go. The boy will be blessed with a beautiful relationship someday in the future.

Who is Adonis Graham?

Adonis Graham is a popular star kid. He is popular for being the son of Famous rapper Drake and an artist, Sophie Brussaux.

He made his public appearance in the 2021 Billboard Music Awards with his dad Drake. Currently, he resides with his mom in France.

Adonis was born on October 11, 2017, in the United States. His parents are Drake (Aubrey Drake Graham) and Sophie Brussaux.

His father is a famous Canadian rapper and singer. Likely his mother is an artist and a former adult film star. She used to work with the Rosee Divine name in her professional life.

Adonis has been living a lavish lifestyle from his younger age with his mother in France. Sophie is French and continues to co-parent her son with Drake. His parent has tried their best to ensure quality time to their son. Drake often flies to meet Adonis when he’s not working.

Adonis’s middle name is Mahbed. He belongs to Canadian nationality and is of Romanian origin. He is of Mixed ( African- American, Ashkenazi Jewish, and  French) ancestry.

The Starkid was kept out of the limelight as much as possible. It was just on March 30, 2020, when Drake shared some photos of his son for the very first time. Before it, in Dec 2019 some blurred images were leaked.

Just in Sep 2020, Drake shared Adonis’s photo of his first day of school. In the photo, he is standing outside near a car in an all-black outfit.

He has just joined his school and must acquire a good education in the upcoming days.

On his Adonis’ second birthday, Drake went all out for his son and posted various photos on Instagram after its celebration. The Hotline Bling star’s home in Canada was decorated all out with balloons that spelled out the name “Adonis”.

There was a huge buzz during Adonis’s birth and his mother’s pregnancy. Actually, Drake and Sophie were never in love and there was no speculation about their affair until Sophie shared her pregnancy news.

Nevertheless, they were spotted together in several places and on dinner dates Jan 2107. It was said that they met on a tour in Europe and led to several public outings together.

It was in May 2017 when Sophie stated that she was three and a half months pregnant with Drake’s child. She had also hired two attorneys from New York City and began the legal proceedings to prove Drake’s paternity and also seek child support from him.

“She’s not my lover like Billie Jean but the kid is mine/Sandi used to tell me all it takes is one time, and it took was one time/S—, we only met two times, two times,”

Pusha T revealed about Drake’s secret son in the year 2018 from his diss track, The Story Of Adidon.

Drake stayed silent on that claims until he released his 2018 album, Scorpion. Through that album, he shared his son’s news with the entire world.

“March 14” was the song where Drake shared the moment when he received the news that Adonis was his son. The song includes the story about his relationship with Brussaux, hoping that they can be good co-parents. Likely, his Emotionless album also some content about Adi.

“I wasn’t hidin’ my kid from the world / I was hidin’ the world from my kid.”

Talking about his net worth, Adonis is at a young age to earn his own. But his parents are super rich and so he is having a lavish lifestyle.

His father Drake is the fifth wealthiest hip-hop artist and has a net worth of around $150 million as of 2020.

He has curly blonde colored hair with blue eyes. And other information regarding his height and body measurement is unknown.

Adonis is active on Instagram with more than 3K followers. As he is still young his account s handled by his loved ones. Also, his parents have a great fan following on their social media accounts.

Why does Adonis have blonde hair?